I discovered that I could do two things on Thursday evening, after doing nothing else all week. The first event that I went to was the launch of Mykaell Riley's Bass Culture research project, which he has succeeded in getting funding for at the third attempt, and not before time. He has had to be really determined, and at last funders have seen sense and understood the importance of what he's doing.
Mykaell is researching British Black Music, which he has been archiving for a long time; the launch was held at the newly-revamped Regent Street Cinema, which is part of the University of the West, and which is a thoroughly glamorous venue.
Dennis Bovell was standing at the bar and I asked after his son, Adrian, who I used to teach many moons ago and who is now a Seventh-Day Adventist pastor in Copenhagen. Another ex-student, Johnny T, plays fiddle for him sometimes. I also chatted to author Daniel Rachel, who has just published a book charting the history of Rock Against Racism, which I'm very much looking forward to reading.
The launch, after the corporate bits were over (they must have downloaded the corporate speech from the internet) was supported by some significant players in the London arts scene. Linton Kwesi Johnson (also with a pastor son, I believe) read his 1970s poem, Bass Culture, which was really moving, as well as being a first claim to the phrase; Dennis talked about his label, Lover's Rock, and putting female singers to the forefront in soft reggae, most especially Janet Kay.
I discovered that the Lovers Rock contingent were playing at the O2 on Saturday with Dennis in the band, but it was a little too expensive for me this time around- Tippa Irie was on the bill, as well as Carroll Thompson, so I hope to find them at another venue soon.
Time was marching on, so I decided to leap on the tube to Chancery Lane to join Zoe Howe at the launch of her book Shine On Marquee Moon in Blackwells, High Holborn. Alas, Oxford Circus tube station looked like a blocked kitchen sink plughole with hordes of commuters jammed around the entrance and unable to get in.
I legged it and got there just in time for a chat with Wilko Johnson, who was waxing lyrical about how he felt about Thin Lizzie (don't ask). I found it incredibly touching that he had made the effort to come out and support Zoe, who wrote a book about him. I think he's a nice geezer!
Alas, I missed the live music, but did have time to catch up with Kat 5, whose band Feral Five also contributed a track to the Hope Not Hate compilation (more of that next week) which features  myriad of artists' music, including one of my new tracks.
I started reading Zoe's book on the tube on the way home- addictive!
Pics: Linton Kwesi Johnson, and Wilko Johnson and Zoe. 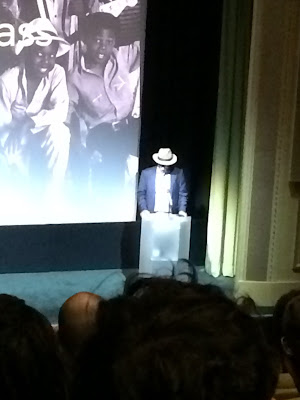 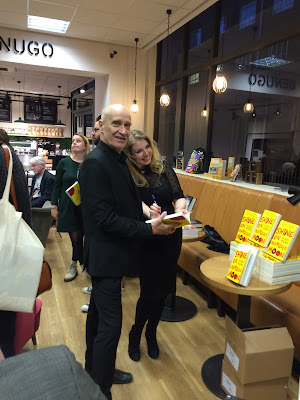