Tonight I will be supporting Martin Stephenson at the Theatre Royal, Nottingham.
This photo is from yesterday's gig at St Paul's Church in Stoke Newington, as part of the Stoke Newington Music Festival. Many thanks to Fran Isherwood for inviting me along!
I went early to see Feral Five's set, where they debuted their song Void which will be on the #notinourname album (to be released next week on Bandcamp). You can listen here to the track in advance: https://soundcloud.com/feralfive
Photos: me by Offsprog One, and Hank Wangford by me. 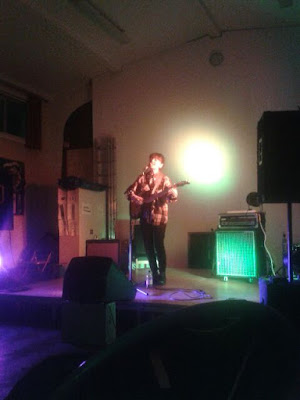 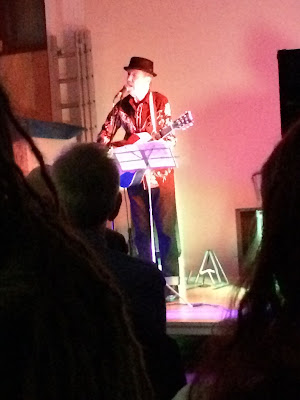 There's something heartwarming about a gig that features in the audience a baby wearing enormous ear protectors almost as large as it's head, and a duo of elderly ladies enthusiastically tapping their feet to punk electronica. Can't beat it!
I wandered off into the depths of the Hackney and Stoke Newington wilderness to tea with Lester Square and Jo, getting lost on the way and only finding the way there after sternly telling myself that a woman of a certain age with a guitar on her back blubbing in the street was not appropriate. When I got there, I was treated to a preview of his great new album of instrumentals (very film-theme), tea and baklava, which put the whole day back on track.
Later, back at the church, Hank Wangford took to the stage, sorted the sound out and then treated us to a set of new songs, for the first time ever without a band, he told us. Hank's a storyteller and couched the songs within vignettes about his communist childhood.
We sang along and then listened in silence as he told us what this government has done to contraceptive and sexual health treatments- taken them away from the NHS and made them the responsibility of local councils, then slashed council funding. I didn't even know this; I was talking about it to Offsprog One this morning and saying that the myth around the Conservative party has always been that they know what they are doing with the country's finances. How they snorted with derision at the Labour party when they took over from them!
It is sobering indeed to realise that they don't have a clue about what they are up to; it's beyond cynicism, beyond incompetence. Babies would do better. Sorry to digress, but so many things are making me weep with disappointment and frustration at the moment. The festival was collecting in aid of the charity Brook and I hear that they were able to contribute a substantial amount towards them.
Good.
Oh yes, my bit!
No babies, no elderly ladies (all went home for kedgeree and Antiques Roadshow, I'll bet) but plenty of people there including a chap who'd listened to Helen and the Horns on the John Peel show and who came along out of curiosity, and the same again with a chap who'd been to see The Chefs. Funny how the two audiences were different: oil and water, different sounding bands, different sorts of gigs.
Since recording the last of the album songs, and the Country Soul Sessions gig where Gem Andrew and her band and Drew Morrison's crew were so massively supportive, I've kind of got my mojo back; thank you to the audience for singing along to The Sea (my own contribution to the above album). I loved it, even though I forgot to spit out my Fisherman's Friend (latest must-have cough sweet) before the first song.
So tonight, I'm off to the Café Bar at the Theatre Royal, Nottingham, and really looking forward to it!