Adventures of a Trolley

While Pauline was playing, an earnest-looking man walked across the front between the audience and the stage, pushing a trolley with empty flat aluminium serving pans on it. Oblivious to the punky crowd, he was on a mission.

Several minutes later, he crossed again in the opposite direction, this time trundling the same trolley with identical pans full of mashed potato covered in clingfilm. He had the same focused, intent expression on his face. Nothing could have been happening, as far as he was concerned: no music, no punks, just his journey across the room with the mashed potato.

His final journey, during Gina's set, was to return in the original direction, again with a trolley with empty pans on it. Was he real? Was he a performance artist doing a piece called Mashed Potato Journey? Was he a figment of my imagination? I've been wondering about this ever since it happened.

It was unnerving to go on stage after a ruffty tuffty band called the Barstool Preachers who had the room stompin' and yelling, but that's the way the cookie crumbled and Gaye, her pal Eric, Gina and Darren-from-Bolton sat in the front for my set and made everything seem OK. Attila the Stockbroker showed up too- my old friend from the 1977 Brighton punk days. In the Spanish Village décor and armed with a Telecaster (UK version), I sang through my songs and was astonished to see a woman picking up the Beachwalk chorus and singing along with it straight away. I was far too tired to be nervous (so knackered that I gave my Rebellion booklet away to Pam Hogg and don't even remember doing it), and anyway I mean my songs and they are true to how I feel. Quite a few people had left after the band and I had a more chilled crowd who were very appreciative.

Pauline Murray was on next, dressed in a fabulous pink original Biba shirt. She was nervous at first but got into her stride very soon, playing a mixture of Penetration and Invisible Girls songs plus some from her lockdown album, which I really enjoyed. She ended with a rousing version of Don't Dictate and got a huge round of applause for that one.

Finally in our girl's club, Gina set up to play and after a couple of teething problems with the computer (#nevertrusttechnology), she put in a fine and rousing set of angry electronica that gave everyone's brains something to chew on. Good! Always, my favourite song is I'm Glad I'm Me Today and I'm glad it made it into the set for the gig.

At such a deep punk festival, what did people think? We hung around to listen to Barnstormer, Attila's band, for a bit, and leaned against a floral pillar wondering, until a very punk-looking gentleman crossed the room to talk to us. He asked us if we spoke French, and in a mixture of French and English, he told us how much he had enjoyed our music. From the heart, he spoke: 'You are true punks!'.

That's good enough for me. The French punk spoke it, so verily it is true!

Posted by Helen McCookerybook at Monday, August 08, 2022 No comments:

I wanted birds in my little dark yard, so ten years ago I planted a white barked birch at the end of the yard because birds like birch trees. As it was growing, no birds came, but at last this year they have discovered the bird feeder and it gets noisy out there. When I go away I fill it up, and when I get back it's empty.

Yesterday when I got back not only was it empty, it had been positively scoured. There were no sparrows to be seen or heard, and it did cross my mind that they had deserted me. I refilled it, and waited.

A scout was sent. I heard a chirp or two last night. Another scout came to confirm it, and returned to the flock to let them know that the seeds had been replenished.

This morning there's a cacophony out there, and at least a third of the seeds have gone already. Chirp, chirp, chirp... and there is also water for them to wash and drink, a tin tray that I top up from time to time. They stand on its edges in a circle (sparrows like circles: ever seen them standing in a circle around a dandelion plant, feasting on its leaves?).

I was going to write more about last week's gigs but I wrote about birds instead. I'm still processing the gigs!

Posted by Helen McCookerybook at Monday, August 08, 2022 No comments:

What a full-on week it's been! There may be time to write about some of it this coming week when I'm on holiday in Scotland (holiday! holiday! Scotland! Scotland!)

The title of the post is what one of our fellow B&B-ers said to us (they weren't there for Rebellion). Here, for now, are some photies (Scottish for photos, practicing) taken at Rebellion. Big thanks to Jennie, Gaye and of course Gina. There is so much to write but I'm so very tired, having been buzzing on adrenaline since Tuesday. This is a mad life, but it's a good one.

These pictures are completely jumbled up- you'll see Pauline Murray, Gaye Black, Gina Birch, Don Letts, Pam Hogg, Rhoda Dakar and more here. Just about the only music I saw was Attila the Stockbroker's Barnstormer. He showed up and sat in the front row while I was playing which was sweet: right back in 1977 we played so many gigs with him and it's amazing to see him still around doing his stuff. And of course I watched Pauline and Gina's sets- the rest of it was talking and listening, and I learned loads, as well as becoming a complete fan of Pam Hogg. And even more of a fan of Rhoda's, who homes in on the truth like a laser. And at last, I managed to acquire one of Gaye's fabulous badges, after giving away all the others I'd bought. 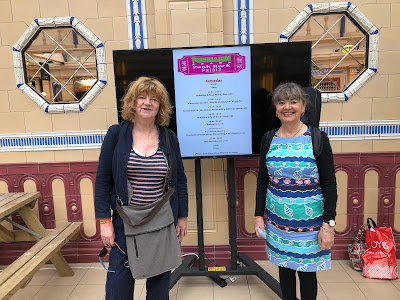 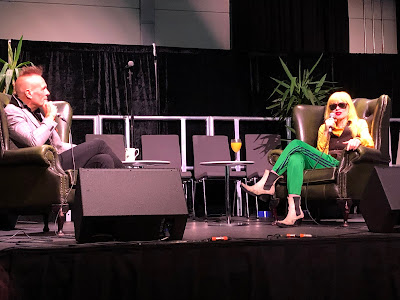 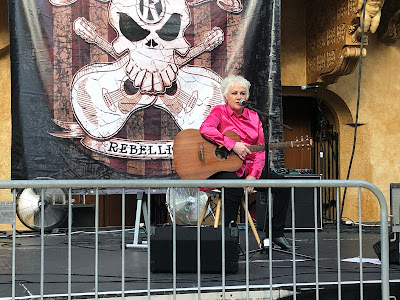 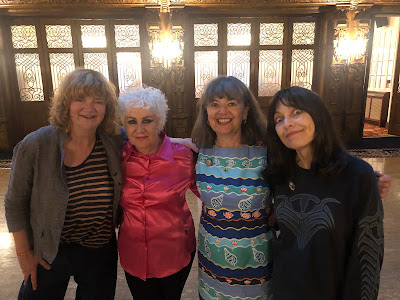 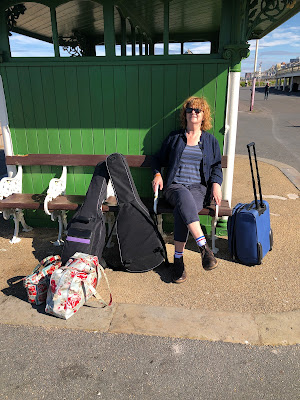 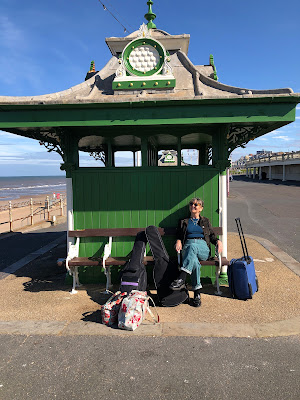 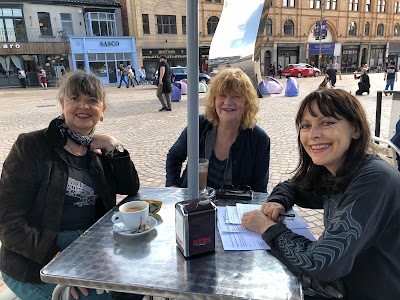 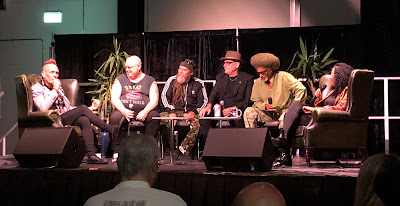 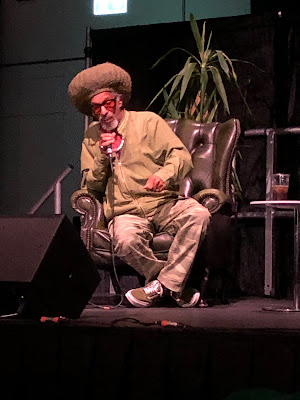 Posted by Helen McCookerybook at Sunday, August 07, 2022 No comments:

It washy unit we started playing that I realised this was our first gig as a duo- but it worked, probably especially well at this gig, where people listened to every word and talked about it afterwards with us.

I'm off to Rebellion with Gina tomorrow, up early: just changing gear in every sense of the word.

Phew. A scorcher of a gig!

Posted by Helen McCookerybook at Thursday, August 04, 2022 No comments:

This was Dexter Bentley's fundraising night and we battled through the muggy air to get there. I've never been to The Moth Club before and loved it's Youth Club feel, and amused regulars in the bar directing the young 'uns (ha!) to the right doorway. It has something of the air of The Brudenell Social Club, in Leeds, to it.

As we arrived, Bas Jan were finishing their set of mostly spoken-word songs, skilfully played and much appreciated by the audience.

Gina was next, and there was a wave of affection from the crowd as soon as she started. The discipline of recording her album with Youth has upped her skills as a vocalist no end- and soon the crowd were singing along lustily to her new material. She was excellent, warm and just as sparkly as the shiny background to the Moth Club stage.

We stayed for Kate Stables because we couldn't not, even though by now our collective temperatures had reached 200 degrees celsius. The crowd took a while to calm down, but Kate has the magical skills of silencing over-enthusiastic chaps by being quiet. Two songs in, everyone was totally with her. She played banjo and guitar with equal aplomb, and sings note-perfectly in a way that blends completely with her playing. 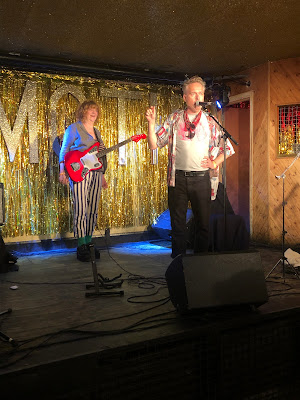 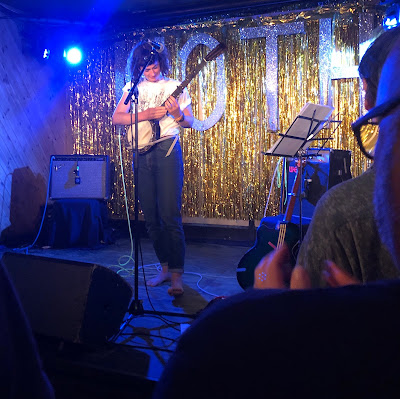 Posted by Helen McCookerybook at Tuesday, August 02, 2022 No comments:

Getting ready to go to Vienna today!

Gideon Coe played 24 Hours last night, which I missed because I was at the resonancefm event at the Moth Club in Hackney to see Gina playing at Dexter Bentley's fundraiser. I'll post about that later if the day has enough hours.

Meanwhile here is a pic of the Only Three Lads podcast that I did on Sunday, too. 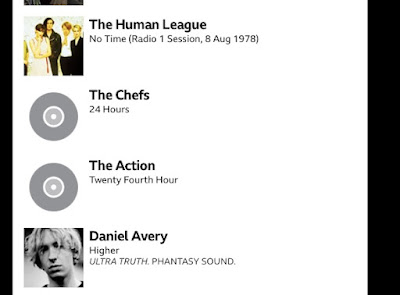 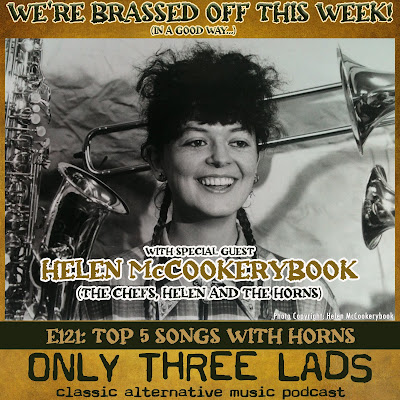 Posted by Helen McCookerybook at Tuesday, August 02, 2022 No comments:

What is really so moving is the number of women reporting the fact that as young girls they were forbidden to play football at school, and seeing their joy and pride that finally it's become a game that they can 'own'. No bitterness, little anger- just celebration and hope for the future. And what graceful playing: proper teamwork, proper focus, a supportive manager. Now is the moment to see it all, because the big businesses are circling and licking their nasty, greedy chops.

How can we fight back to stop them gutting the goodwill out of this sport as it thrives, and making the matches too expensive for so many people to attend? You can feel the profiteering sharks circling around...

I hope the strong will of the individual team members holds out against exploitation with the power of their collective force. Spirit of St Trinians! 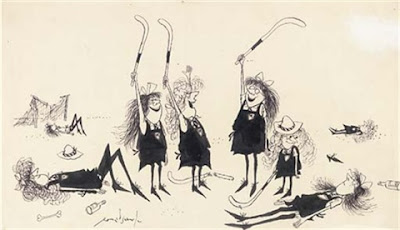 Posted by Helen McCookerybook at Monday, August 01, 2022 No comments: