The Country Soul Sessions at The Spice of Life Last Night

It was a cathartic evening.
I unwrapped my best cowboy shirt from its dry-cleaning polythene. Sometimes, when you get something dry cleaned and it looks all nice, you feel like you shouldn't wear it again, so that was quite a hurdle too. My best cowboy shirt came from The Rat's Nest, a shop in Charlotte, North Carolina, that specialises in vintage western wear and has a garden out the back full of saggy sofas and a makeshift stage where rambling bands play Johnny Cash songs in the dark. That's partly why it's my best shirt, but it also has diamond-shaped black buttons and a black'n'white gingham trim round the pockets, and that helps too.
Sorry for the digression, but I've had a long day at work and my brain's a little rambly as a result.
I had been looking forward to this gig; Gem Andrews, who is an Americana artist that I first met in the north east at a gig at The Cluny where we were both supporting Martin, asked me over a year ago to support her and her band, so it had been in the diary for a long time, like all the best gigs ever.
She has been touring with the band and this was the last date of the tour; they were tired but in excellent spirits, tucking into mega plates of food when I got there. Drew Morrison, who runs the gig, was warm and welcoming, and there was a really nice vibe in the basement bar where the gigs happen.
First to take to the stage was Caroline Mary, who has been on tour with them. Caroline has a gorgeous voice; I can't think of a better way to describe it than like the best ice cream you have ever tasted. I have her CD to listen to, and I really think she should play Indietracks next year, if anyone out there's listening. Drew's band The Darkwood, played next, a set of wood-smoked country songs with a stylish twist that got all our toes tapping in their assorted footwear. The room filled up with regulars and Drew's genial stage persona increased the general sense of bonhomie.
My turn; these were hard acts to follow but when there's such a positive atmosphere in the room, nobody's scared, and I really enjoyed playing with all my heart and soul (even if the country bit only peeped in from time to time). They laughed at my jokes. Bless!
Gem passed her little dog to a friend and the band assembled around her. After a 30 date tour, they were as tight as anything, swaying in unison and playing as one. They started with the Ladybird Waltz, Gem's crystal clear voice augmented by Nicky Ruston's beautiful harmonies. I was struck by the fact that the band sing along, even though they have no microphones; they are so connected to their lead performer and her material that they live it as they play it. They love their gig.
One song in particular brought me to tears; I think the name of the song was Caroline, about a friend of all of the band who set up a choir of synchronised crisp eaters. It was a lovely song, one of many. 'We're wearing your smile'.
Watching band with such great musicians, the gender of the band is irrelevant, but because I write about these things in my other life as an academic, I do have to say what a pleasure it is to see such great musicianship from a keyboard/accordion player, drummer and double bass player who are not blokes. The one man in the group is the violin player, clearly chosen for his merits above his gender, and an absolute sweetheart.
Apparently the little doggie sometimes watches, but tour fatigue must have set in because she/he snoozed throughout the show.
I can't tell you how much I appreciated the warmth and good humour of the night. Thank you to my friends who came along, the new friends I've made, the sound guy who was absolutely great, and the chap who hadn't been to see me play since the Count of Three Titus Andronicus pantomime at The Hoxton Hall aeons ago (oh, another life, another life). Unbelievable for a London gig, I sold four CDs to boot, and I vow to spend the money on chocolate, and chocolate alone. I know the last paragraph sounds a little like a grandiose acceptance speech, but it's no less heartfelt for that. I need happiness- don't we all?- and last night it arrived in spades with bunch of great people and a bunch of great music.
(I nicked your photo Gem, I hope you don't mind) 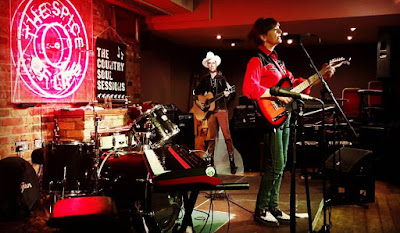 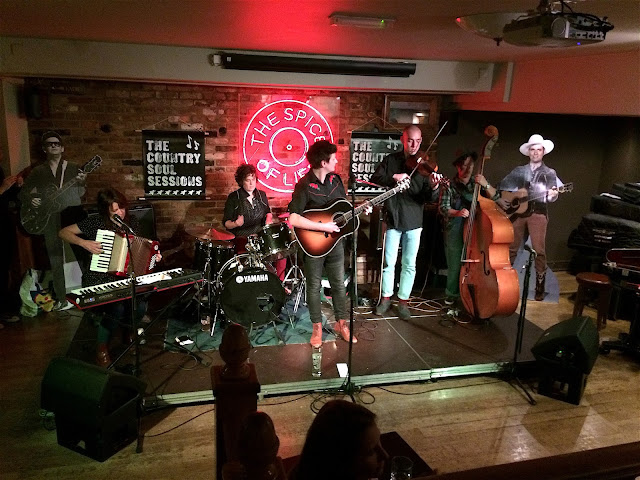 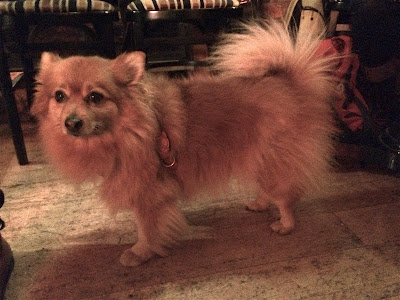 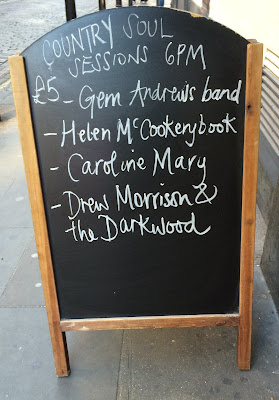