Radio 3 Interview About 'She's At The Controls' 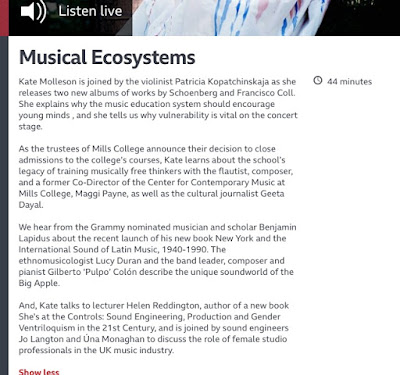 New Video for 'Fatberg' by Ruth Tidmarsh- Just In Time For Bandcamp Friday!


Available from here: https://helenmccookerybook.bandcamp.com/track/fatberg
Posted by Helen McCookerybook at Friday, May 07, 2021 No comments:

I woke up at the Usual Time this morning, for verily, normal life carries on and I have to (a) vote and (b) do a whole lot of marking today. I do feel happy though, after last night! Part of it was quite simply singing out properly and playing with amplification; I do sing and play at home, of course, but politely out of consideration for the neighbours. These houses have very thin walls. Once, Offprog Two and me sat watching TV with the sound down and we could hear the dialogue from Eastenders coming through the wall.

There's a huge amount of traffic in London. We are all in our cars because we are afraid of travelling on the tube with people who don't wear masks, all squashed up in a viral soup. What should have been a 45 minute journey took more like two hours. The roads have been revised since lockdown and nobody knows where they are, and neither do I. Luckily I'm a short sound checker.

The church is beautiful and the organiser Gareth and sound guy Dave were the only people there when I got there. I tuned up, cleaned up, poured a cup of camomile tea (it was cold in there!), sound checked and waited until just before 8. There was one person in the audience, and the vicar passed through once or twice.

The lights came up, the music flowed and off we went! I imagined people at home sitting on their sofas, though I was in a box of lights with the paintings on the church walls looking sternly on, but it really was good to sing again in a  proper venue. My fingers felt like frozen twigs that I had to snap to form chords (even by the end of the gig they were still cold) but I did a gig in Spitalfields market in temperatures of -10 once, so they just had to obey the instructions to do as they were told. There was no PA system, just monitors; maybe it would have felt like elevated singing in the bath if I hadn't had my guitar in my hands!

Every time I do anything like this, I feel thankful because life might have been so very different. I can't articulate exactly what happened because it is private, but there is something so magical in this freedom that absolutely blasts its way through any desire to be a pop star or anything like that (bit too late, anyway). It's being able to stand there and sing what I want, the way I want to sing it, to have learned to play well enough to make music to sing to.

Afterwards, the vicar came out. What a sweet man. He had watched at home he said, because the sound was better there. We chatted about closed churches and mosques, and gigs in churches, and how good Peggy Seeger is. Imagine being an enlightened vicar who not only does vicarly things but also gets to see gigs in his church. Now that's some life.

Thank you to everyone who 'came along'!

Posted by Helen McCookerybook at Thursday, May 06, 2021 No comments: 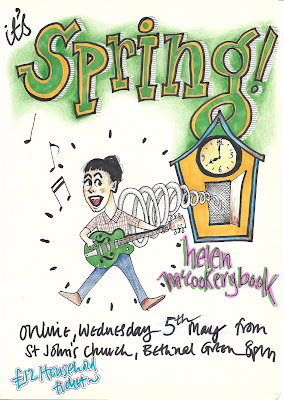 Join me at this event tonight at 8 p.m.

It will be weird: me and the sound crew, and everyone else there in my imagination. I have had a few requests for songs.

Let me know if there's a song you'd like me to play, and I'll get it out from the attic and dust it!

Posted by Helen McCookerybook at Wednesday, May 05, 2021 No comments:

Last week's mega workload has rendered me a complete energy-exhausted flop today. I have the desktop computer 'jukebox' playing Rufus Wainwright gently in the background, with bits of Terry Callier and Odetta thrown in here and there. I've dug out some lyrics sheets for songs I'd forgotten the lyrics to. I've done some marking, and discovered that another of my students appears to have got a job after doing a work placement. This almost made me cry; life is just so tough for people these days. I feel so proud of her.

The sun is temporarily shining and it's tempting to get out there, but when I went shopping for coffee this morning, I was tricked. It started raining as soon as the front door clicked shut. So I don't believe you, Mr Sunshine: you're a liar, just like almost everyone else. Or at least, the people who tell us that they aren't.

Isaac Hayes. How I love the atmosphere of old recordings; you can almost hear the wood panelling and the scruffy carpets in the music, with the cigarette smoke curling through the dense air of the basement and the empty whisky bottles lying on their sides amongst the worn-out shoes of the musicians.

I should do some more cleaning. The regular moth flypasts in the evenings are becoming bit of a joke, and there are small beetles sneaking around everywhere. The spiders have given up: they are maxed out and their webs are getting tatty through misuse. I washed the kitchen floor this morning, peeling inexplicable tiny blobs of dusty Blu-tack off the linoleum and rinsing dust-clogged yellow cloths in grey soupy water in the sink. Motivation is low for such things, though, especially when the living room is full of tempting guitars and piles of lyrics.

Actually, my finger-ends are sore after graduating from the Spanish guitar to the Green Goddess. The digital divas are taking a rest until later tonight or even tomorrow morning. I've almost forgotten how to rehearse for a live gig.

I do remember that you can't stop a song halfway through and put the kettle on at a gig, so I suppose that's a good start.

Posted by Helen McCookerybook at Tuesday, May 04, 2021 No comments:

Tony Hancock in 'The Rebel' from Drawing Club 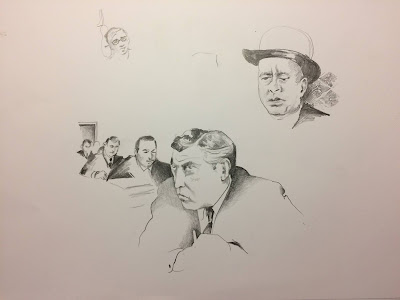 Drawing Club on Sundays: a kind of dreamy online activity with the imagined whisking sound of pencils of paper. We are far-flung: Edinburgh, Bolton, Kent, London. Conversation chunters along, we hold up our drawings to the little computer camera and show each other what we've done.

I missed out on watching most of the actual film because I did a screenshot of the beginning with the bowler-hatted men and the deadly uniform workplace, and started drawing that, so the film is on the list to watch properly another time. From earwigging the discussion, it seems there are a lot of awkward truths that unfold in the story: very Hancock. Very awkward Hancock.

What else? Lots of rehearsing with my guitar for Wednesday night's gig, a lovely lunchtime Zoom with my friend Joan about an animation/sound mini-project, watching the forthcoming Fatberg video come into existence (!), cooking a huge pot of green vegetable soup, and making a start on the mountain of marking. And marvelling at the silly pigeon that got into a local shop window yesterday, only to be joined by two more silly pigeons today. 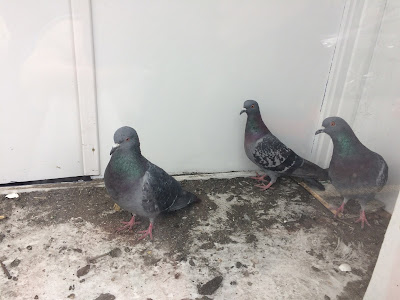 Posted by Helen McCookerybook at Monday, May 03, 2021 No comments: