Silencerz at The Bull, Barnet 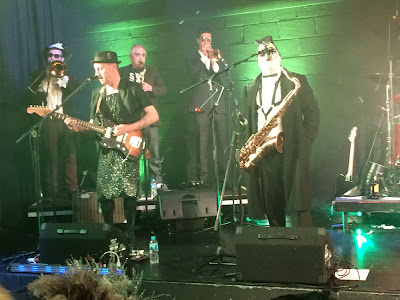 The Bull in Barnet is now a theatre school, so it was a good move for the Silencerz to play there this evening. Barnet has been a pretty dead night-time town since the arts centre closed down; it was livened up a bit tonight.
There was a great DJ who played some superb vintage ska tracks as clips of 1950s black and white sci-fi and horror films were projected on to the wall behind the stage. There are ten Silencerz and the trombone player, Julian, is a mate of Offsprog Two's. It's always nice to have somebody to cheer on, but the whole band were pretty nifty. Most of the tracks were covers (not keen on the Paul Simon one, Mother and Child Reunion, but Offsprog Two said that it's a people-pleaser, and she's right) but I also enjoyed the original song they played before the interval. There are one or two Blockheads tracks in there too, but the best ones were the proper ska tunes. The band is bloody tight, and the chat between songs is amiable and witty. It didn't take long for the audience to burst out of their chairs and start dancing in front of the stage; the pub had come to the theatre, and halloween costumes mingled with beer bottles held aloft by bouncing blokes and glamorous ladies. It was a very happy evening.
I'm such a music bore that I spent ages working out which guitar parts were played by who. There are two guitarists; one plays a Fender Jaguar and the other a Stratocaster, and they took turns playing the bubble and the /-ska parts; I tried to watch the chords for licks to steal but they were too far away. And as usual, I wished that I could drum. It's ska and rockabilly that do this to me. The Silencerz drummer is very good.
I came home early to nurse my poorly chest. It's been a music-filled week, with the gig with Martin in Nottingham on Monday, Robyn Hitchcock on Tuesday at Cecil Sharp House, and the Silencerz this evening. Next week I'm off to see The Raincoats and Angel Olsen and hoping to get my voice back in time to record Femme Fatale. For most of the past couple of days, I've been sitting staring into space and feeling miserable. I don't do a good 'being ill' and I've drunk enough cups of tea to sink the navy.
Posted by Helen McCookerybook at Saturday, October 29, 2016