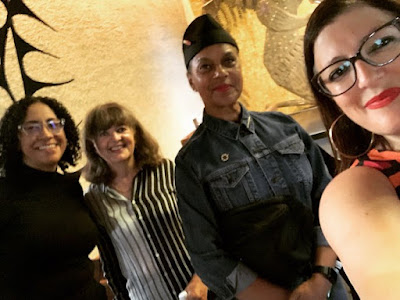 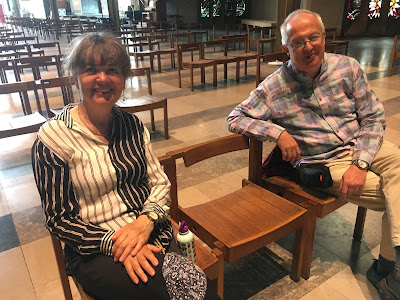 Coventry Cathedral is nothing short of elegant. It is a testimony to 1960s design: tall, graceful and with lovely interior design right down to the tapestry kneeling cushions and sculptural fixtures and fittings. Just walking into the building felt like making a grand entrance yet there was a definite aura of defiance there too: a phoenix grown from the ashes of the Second World War.
The original panel convenor, Jennifer Otter Bickerstaffe, was in quarantine (no pinging here, please: this is a pandemic). I had been intrigued to meet her because I think she was one of the people who filled out a questionnaire for the research I did for my original PhD on women punk instrumentalists. However, the organiser, Professor Helen Wheatley stepped in, and her questions elicited some very interesting answers, notably from Pauline Black who revealed that her first inspirational musician was Mick Jagger, and Rhoda Dakar saying she was an original mod with the 'onwards and upwards' aesthetic. We talked about who had helped us as young musicians, the music industry and much more. It was a real pleasure being part of such a feisty panel, and Pauline should be awarded a Damehood for being one of Britain's most stylish dressers. Both women are very funny, especially behind the scenes.
Despite the hot weather and extremely uncomfortable seats, around 70 people turned up to listen to the intro from the Dean (a pacifist who objected to the army vehicles parked in the grounds as apart of a vintage car festival), before our panel and then a screening of Stories from the She-Punks followed by Sisters with Transistors. This has to be the most unusual and prestigious venue that the film has been screened in. Despite a 6-7 second delay in sound due to the cathedral's acoustics, and everyone baking in it's thick concrete oven, the film seemed to go down really well. Sisters with Transistors is also a very interesting film, with archive footage and sound that included interviews with Delia Derbyshire and Daphne Oram.
It was great to see Andy Holdcroft (heart and soul of Coventry music), and sad to miss The Sunbathers who were hidden in the audience. Thank you everyone who came along, and especially to Helen for the invitation to show the film. Things felt almost normal, although they aren't.
Here is Andy Holdcroft's review of the night: https://www.hotmusiclive.co.uk/MAGAZINE/magazine/article.php?article=13018
I have awarded myself the patience-behind-a-wheel prize for finding the way to the car park at the back of the cathedral, which took as long as the drive to Coventry itself, and for getting back home (the entire southbound M1 was diverted via Milton Keynes), a three hour slog in a convoy with every HGV vehicle in the whole of the UK.
Posted by Helen McCookerybook at Monday, July 26, 2021