After all the excitement of Friday and Saturday, the rest of the weekend was a come-down. It has been such a rotten year, but a few weeks ago I was given the opportunity to travel to Calais for an impromptu music day in the refugee camps that would mirror Calais' official music day on June 20th. This was to have been an adventure with musicians that I hadn't met before, and perhaps a cathartic response to the feelings of futility I have about the crisis in the Middle East, and a few other things besides.
I dug out my passport and waited for news, but heard nothing until late last week. It all began to seem a little tenuous, and I decided it was probably best not to go, but to meet the group anyway so at least I knew them for next time.
Alas, when I got there, I couldn't get access to the building because the organiser hadn't told me that I wouldn't be able to get in unless he was there to sign me in. And he wasn't there.
Back out into the relentless rain I plodded, my feet soaked through and my heart in my boots. As I stumped through Bloomsbury up to Euston for the train home, I noticed something on the stone steps of one of the terraced houses next to me; it bounced on to the railings, then on to the steps of the next house along, then back up on to those railings.
A wren- in Bloomsbury of all places! What a beautiful sight. And I saw a robin, too. The city must be healthier than I'd thought. The journey didn't seem wasted after that. I know my drawing doesn't look like a wren and it's the wrong colours too but I felt like having a try, just because the little bird cheered me up. 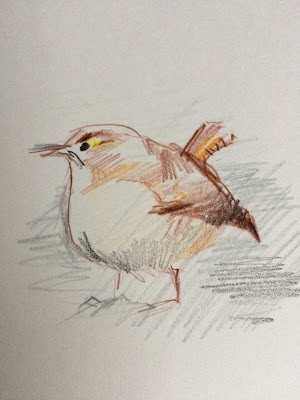