Love with Johnny Echols at The Garage 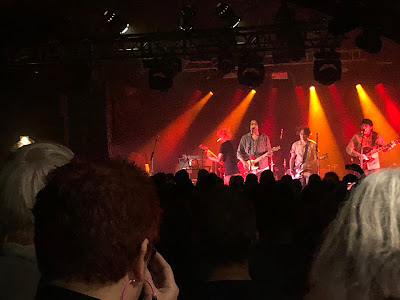 Two concerts of the three scheduled for London had been cancelled due to the singer losing his voice, but thankfully this one went ahead. Thanks to Caryne and Dave (who were doing a roaring trade on the merch stand), I had a guest list place and even though it was extremely hot, this gig couldn't be missed. The venue was packed with an audience that can only be described as adoring: mainly older people buzzing with anticipation, but also some new blood who seemed to know the songs backwards. Last time I saw the band was in Glasgow, but no two gigs are the same and it was intriguing to see them again more than two years later after things have changed so much.

For a start, this time I watched and listened as a musician. After deep-diving into the mixing of an album, I found the live sound mix really absorbing. The drums sound particularly good (are all live sound engineers drummers?). In fact everything sounded good, apart from the occasional muddy mix of the vocal harmonies, which was a real shame. I wished that I could loop some of the songs to work out the harmonies, which of course are absolutely inspired. I was trying to map them in my head and in my mind's eye they were like automation lines on a Logic page: colliding and swerving and all sung perfectly in tune. And the guitars!

This is a really good band. I was particularly taken by the bass player (possibly new), who was clearly loving the bass lines and the sheer musicality of it all. Even from a distance you could see that he was living within the music and thoroughly enjoying being in the band; he was completely latched on to the groove all the way through and was delighted to be standing next to Johnny, sharing the occasional bit of banter with him. I found this completely charming, a perfect illustration of the agelessness of the songs. The band obviously had a lot of affection for their trumpet player, too. He was bell-clear and probably classically trained.

At one point, the DJ came on stage to play a song which meant there were no less than four guitars on stage, which was quite incredible. Bonhomie radiated from the stage and although I'd intended to just stay for a couple of songs (the heat was unbearable for this Celt with thin northern blood), I couldn't leave. The atmosphere was great and the audience was full of characters. A man with a walrus moustache and sideburns was standing next to me, having  lovely time with his pals; young women came up to buy giant t-shirts to wear as dresses, and in part of the room there was a small collection of wheelchair-users. People roared along to songs and conducted the solos (rather brilliant, Mr Johnny Echols) with arms aloft and fingers pointing in different directions.

Now I must listen to their recorded music with fresh ears. The last band I saw at The Garage was actually King Kurt, my ex-husband's band. I was struck last night by just how many rock tropes King Kurt incorporated into their music despite their psychobilly intentions, because last night's psychedelic sound was firmly rooted in stop/start structures and a big, tight sound that are common to all rock music. Of course, though, Love were precursors to all of that. In other words, this band contributed powerfully to a language of rock music that has lived on for more than 50 years.

A few years ago I went to see the documentary, Love Story. It's a great film if you get a chance to see it. Music frequently does more for race politics than 'politics' does, and this current incarnation of the band follows that principle through, which is great to see. For gender you've got to look at Sly and the Family stone, but that's another story.

All in all, I think everyone who was there would agree that it was a wonderful night out. The singer did the band proud and managed to resist getting the crowd to sing everything for him (just a little bit of one song, but he took over again pretty quickly). The atmosphere was fantastic, and the staff at The Garage were perfect. Ten out of ten, bar staff and doormen, for managing a very hot and crowded night without losing it!