Exeter to London: Micko and the Mellotronics and The Monochrome Set

The couple in the adjoining room who were at it all night woke up far too early, and the man started moaning. 'I hate it here! I'm going home'. I'd thought they were young-people-nowadays, and was absolutely astonished to meet him on the stairs: there stood a greyhair, probably older than me! I couldn't wait to get out of the place.

It was a blessing in disguise because the train had been cancelled, but there was space on another one and I got home in time to spill an entire cup of coffee on the sofa, and various other mishaps. At the Lexington, the Mellotronics were waiting anxiously for their drummer, whose phone had broken and who had gone off to sort it out. They couldn't phone him to find out where he was, but he did reappear in time for their sound check, complete with a new phone which he could be found trying to work at various points in the evening.

The big room upstairs at The Lexington filled up quickly (thanks to my family for coming and also to Gina and Mike, Mandy, Katy and Alex, Shanne, Terry, Donna and Paul) and although I was tired, everything gig-related worked quiet well, and this night had a proper listening crowd. Nice to see Peter Tainsh out and about taking photos, and also Karen Gymslip and a few other people I knew. I felt appreciated and listened to. Being an opening act can be hard, but it really felt as though people had come out to listen to everyone on the bill. Best of all, normally The Monochrome Set don't watch the support acts but they were around this time, standing at the side and listening. It could have felt scary, but I was too damn tired to care and they weren't cringing, so it must have been OK.

Micko and the Mellotronics are a trio with a very snappily-dressed lead singer who has a strong line in shredder guitar parts. He plays a Thunderbird and is complemented by forceful bass playing by the woman counterpart next to him on stage. Their sound is tight and almost aggressive, although their material benefits from this rather than anything else. There was something of The Who about them.

And then of course, The Monochrome Set. I have been seeing them play since the 1980s, and they still come up with the goods. They invented a particular sort of sound: almost lounge-style singing over twangling guitar, bass straight through the ground and into the soul, rhythms that head down one route and back another, and keyboard. Bid's vocal lines arabesque and twirl, almost nodding to Lou Reed in places. I was particularly fascinated by one of the three (I think) new songs they played. It had this odd, delicate sound to it quite unlike anything else they have done. Afterwards, I told Bid how much I liked it and he was surprised, saying that they'd almost decided not to do it. But it sounded to me as though that particular song held the key to a possible future direction in sound for them. I know that's really nerdy, but I've become so absorbed in listening to bands and what they cook up with the same ingredients that I can't help but think of these things. They have a gig later in the year with founder-member Lester Square joining them on guitar and I can't wait for that! They played two encores and actually cracked a smile or two. Ha ha! What a great night to end a threesome of gigs.

And today I am a zombie. Offsprog Two woke me with a text this morning asking me how the gig went. She had forgotten that rock'n'roll breakfast time is roughly around 1 p.m., not 8.30 in the morning. I heffalumped out of bed and made some tea. Later, I scoured Barnet for a chocolate bunny and a couple of secondhand paperbacks, and that kind of sums up today. Entire chocolate bunny eaten, hot cross buns thawing, tea drunk and book half-read. Next gig is on Friday at The Troubador in Fulham with Daniel Takes a Train, which I'll take the Green Goddess to. I'm looking forward to it! 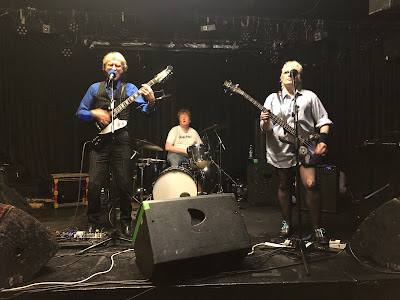 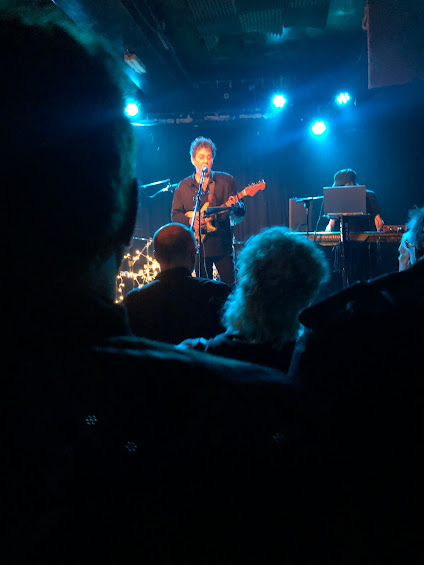 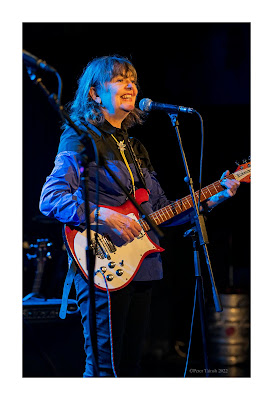