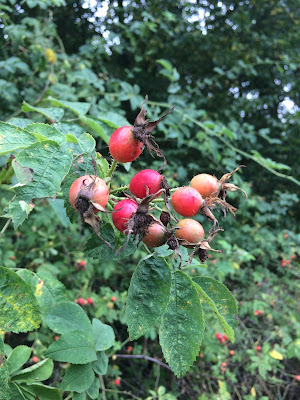 It's rose hip season! At primary school we used to go out picking huge quantities of these and have weigh-ins, being paid a pittance by the pound by a company called Delrosa who used to manufacture Rose Hip Syrup.
I posted this on social media and discovered that  my friends all over the north east of England also used to do this, sometimes organised by the Women's Institute, rather than schools.
Delrosa was based in Wallsend which was fairly close by, and all of us used to drink the syrupy beverage, encouraged by the fact that it was allegedly very high in vitamin C, which of course would have been boiled out of the berries in the manufacturing process. I think you could even get it at the clinic in the village. It was absolutely delicious despite its dubious nutritional value (also by general agreement). What an odd thing to have done: it's exploitative child labour, isn't it? It was fun, but always ultimately a disappointment when what you thought was a gigantic haul was weighed and you took home a mere few coins in payment.
The north east was such an odd place to be brought up. They tested all sorts of things on us- the original GCSE qualifications based on coursework (called 'Certificate of Extended Education': I've got one in General Studies), which we did in the 6th form alongside our 'A' Levels; weird crisp flavours like mint sauce and tomato ketchup years before they cropped up anywhere else; floating breakfast cereals that had been developed for astronauts. I think it was regarded as an odd enclave that people never entered or left, a bit like Mars on Earth. But some of us escaped, and I was one of them, and now I've told you!
Posted by Helen McCookerybook at Tuesday, August 18, 2020