The Smartees at The Vault in Brighton

I pinched this from DJ Gremlin just now. I had completely forgotten that The Smartees had played in the Vault. He reckons this was 1978 and already we had stopped looking punky; by later on that year we'd split up. I remember wondering what to do with myself, then Carl came round and asked me to be in a band with him. I was shocked that anyone thought I was good enough on bass to want to be in a band with. He had already set one of my poems to music- Food. That's commitment!
Left to right: me and my Jedsen bass that I spent my BSA Bantam money on, Steve and his matching Jedsen guitar (both cream with white scratch plate), Carl with his red plastic guitar, and Tracy.
Joby (vocals) and Ricky (drums) are both missing. We always used to have loads of people come on stage and sing the songs with us. 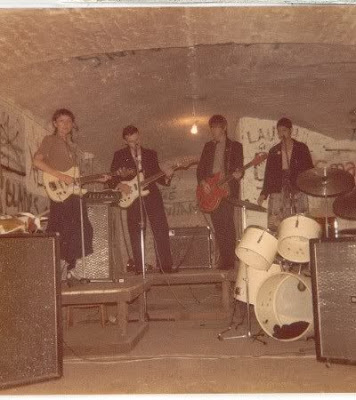