Twitter is bristling with disgust at the pro-European marchers, with 'suck it up' being the main focus of the comments, and some more measured comments noting that a democratic vote has decided that we should leave. I feel very strongly that we should stay, and that many of the Leave campaigners were influenced, or at least informed by, outright lies told by people who were acting out an Eton pie-fight in the dorms and have now fled to hide behind nanny's skirts.
So that's my hate-filled rant over.
Overhead, helicopters zipped about like flies round a lightbulb; it took an hour for people to assemble because there were a lot of us. Periodically, a naked woman appeared on a balcony of the Hilton Hotel to massive cheering from the crowd.
People handed out badges, and two young women were offering to paint EU flags on people's faces; I watched as they painted a woman dressed in a hijab, who had come along on her own. Very brave, I thought, as was the young man with a hipster-coiffed moustache and beard, who was on crutches. I gave him my badge and realised later that the bottle of water might have been more practical.
It took three hours to walk from Park Lane to Parliament Square, so it was more of a meander than a march. There were loads of young people, and people with young babies.
I don't think marching changes much but this one seemed as much about making people feel better as anything else. I love being European, and I was delighted when my European passport turned up today. Yes, I know big business has had its nose in the trough but lots of survival laws have been passed that help people like me and my kids: and I like foreigners. What's wrong with that?
Photos: badges; EU Bull Terrier has a snack; stylish banner; DIY banners; Novo Castrian banner; wind-up pro-Brexit merchant. Victim rescued: 'It's SATIRE mate! Don't make a fool of yourself'. 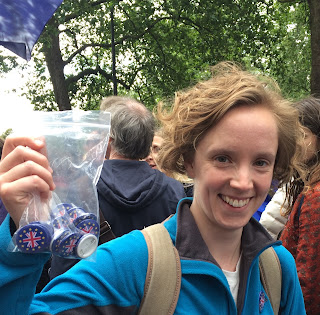 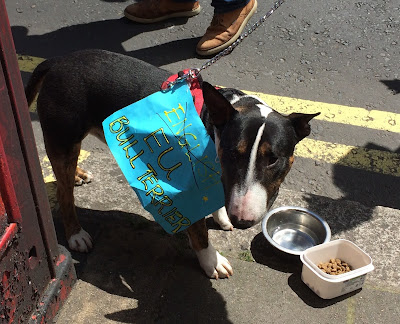 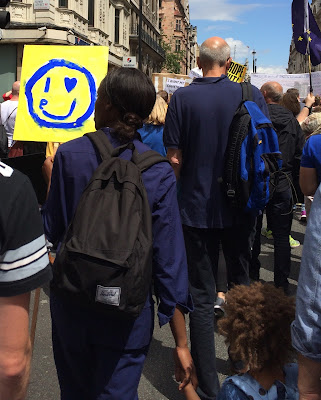 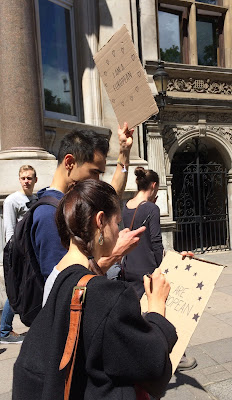 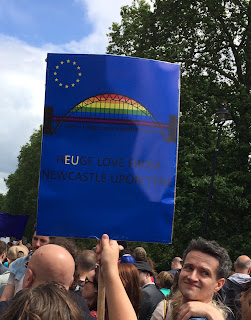 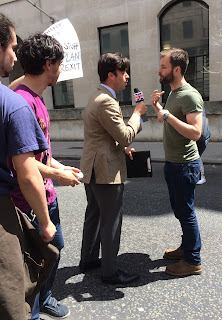 a lot of these people were also at The miner's strike!

Weirdly, I was next door at British Summer Time while all this was going on, though I did see some early assembling by Hyde Park corner as I was going in and I know some of the BST attendees did a bit of the march before going to the festival, and Georgia gave the march a mention during her set. I had 4 bands I wanted to see first thing and once you're in you can't come out and go back in again, hence not going. Did venture down to Parliament Square on Friday night though to see if anything interesting was happening but the place was just full of tourists peering through the railings.

Please can you publish places in Brighton where the average 'Chefs' fan can visit!