Yesterday was a busy day; I spent a few hours round at Gina's, while we constructed the Kickstarter site. There is still more to do and we are finishing it on Tuesday ready to go to them for approval- so it may go live at the end of next week, fingers crossed.
Afterwards I went home for a 10-minute power nap (who can do anything in this muggy weather?) and then I drove up to Cambridge Community Radio for an interview with the charming Dave Hammond, whose show Dave Hammond's Smelly Flowerpot will be broadcast on Monday- details to follow here http://cambridge105.fm/shows/flowerpot/
We talked about The Chefs, Helen and the Horns, punk, Stories from the She-Punks (of course) and he played The Raincoats, The Slits, The Mo-Dettes, and The Adverts. Because The Dolly Mixture started up in Cambridge, we talked a lot about them. I played some songs live, including making a humungous mistake in one of them, which I had to segue into a completely different song as I forgot the words. It was boiling in there- they had all their servers on at full tilt in order to broadcast live from the Cambridge Folk Festival. It was a really enjoyable evening.
There is a wonderful thatched cottage on the main road into Cambridge from the A1; it lives next to a rather drab row of shops but it struts its stuff with great panache. I stopped to take a photo on the way home; irresistible.
This afternoon, I finished pre-mastering the new album with Jono. It's sounding good, but its time for an ears rest now, till the end of August. I'm off to Indietracks tomorrow, playing there on Sunday afternoon! 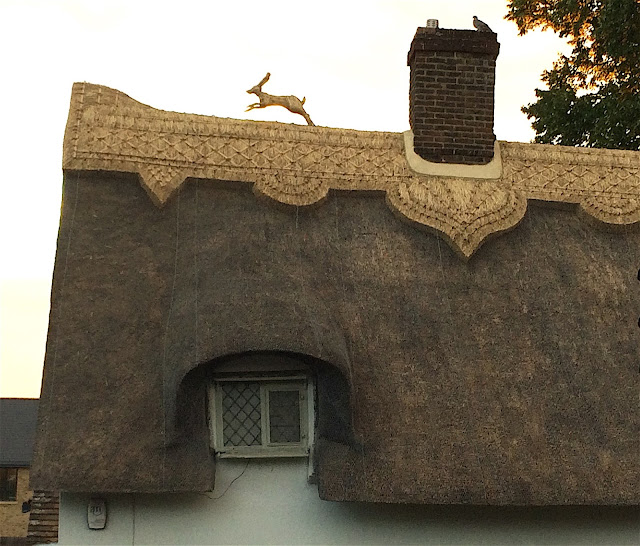