Sunday Drawing Club is a great prescription for too much anything. After disappearing down the computer rabbithole yesterday, the gentle banter and the show-and-tell nature of it all was a wonderfully calming way to spend the evening and escape from the endless Jubilee TV. There was a street party here and everyone seemed to be having a lot of fun; in between editing I took a cup of tea and perambled a couple of times. It did seem rather odd that people were being sent away for not living in the street. That didn't seem quite in the spirit of things, so I retreated back home. Large-scale images of Prince Andrew and Prince Charles project themselves across my internal screen too regularly. The millions of pounds paid to get Andrew off the hook came from our taxes. And of course, the food banks. Just think how much we could have provided for our poorer people if that money had been spent on them instead. Ever been swindled?

So where were we? All nice and calm after drawing club. Darren Hayman was drawing a cover for a forthcoming live album: strong lines picked out the dramatic architecture of the church, under the ceiling of which nestled him and his band. Darren Riley's drawings romped colourfully through heroes of 1960s and 1970s popular culture. Duncan drew a still life of a glass on the table which reflected the evening light beautifully, and Sarah drew a hundred-days mini comic of their motivation for banging nails into the new fence: imagine Jacob Rees-Mogg's and Price Andrew's faces on the nail heads, and it increases their bashabilty exponentially.

I drew two drawings from the imagination, which I haven't done much of at Drawing Club. I am going to illustrate two books and being asked to do the second made me realise that I have to get my skates on and illustrate the first. It's a personal book that a mother reads to her children, and the first job was to create the character. I drew one that didn't look quite right, and started again. Here they are, a wingnut, otherwise know as a sycamore seed: 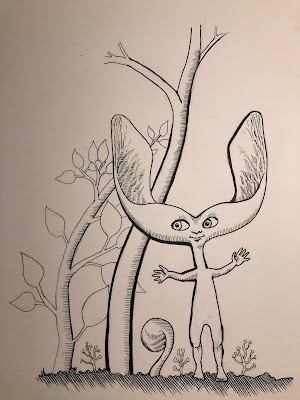