Today I've been marking student songs; I've almost finished and I'm just waiting for a member of staff to try to disentangle a download, so to speak.

At dawn (why did I wake so early) I made another attempt at learning the German lyrics to one of mine and Robert's songs. It's actually quite a good time to try to memorise things because I'm almost there after the early start. I just need another dawn awakening, and to be able to sing it at the speed of the song. Then there are three more to learn! I am determined not to have a music stand by the time we do our gigs in July.

I'm not going to do any editing today, because I go in there so deep that I end up in Zombie land for the rest of the day. Instead, I'm doing bit of sparrow-listening. After ten years living here, they have finally discovered the back yard. I can't bear to cut any of the tangled greenery back because they are having such a lovely time. The robin even feeds it's robinette on the garden bench, which they have pooed all over. I know I'll toughen up eventually but at the moment I'm enjoying the din and the activity.

Here is a lovely peony. Just one bloom, but it's so huge I'll forgive it. 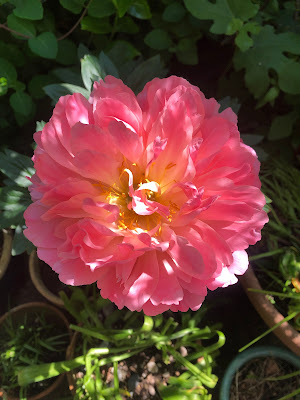 Posted by Helen McCookerybook at Thursday, May 19, 2022