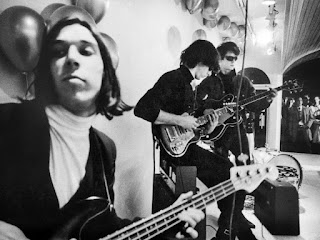 This afternoon, I bit the bullet and went to see the film The Velvet Underground at the ICA, because it's going to disappear, just like Summer of Soul. It has been made by Greedy-Apple-Corporation-Sells-You-Music-And-Things-To-Play-It-On, and I'm not a customer of theirs; it will whoosh on to their streaming service next week, and that will be the end of it. I was so desperate to see it, and I reckoned I could sit there in the dark by myself, and just absorb it even though I still feel crap.

The ICA is robot land, isn't it? Even the toilet is made for robots. On the way out when I went to the loo, the toilet decided that I'd finished my business and flushed anyway. I hadn't finished, but the toilet was very self-assured in its design and now I'm wondering if it was gaslighting me. It was scary.

Back to the film. As far as I'm concerned, The Velvet Underground began it all: the early version of the band, when they were swirling around in both meanness and beauty, was just fabulous. At several points in the film, my hair stood on end. Jonathan Richman, a mad uber-fan of theirs, describes trying to identify what the instruments were playing at a live performance, and discovering that quite often there were sounds happening that came from nobody's instrument at all: they were just there in the atmosphere.

Yes, they were the sound of meanness, but they were also the sound of mystery, and lyrically they turned over the stone and showed us all the bad things that had been hiding underneath it. What a relief to see and hear that honesty!

The little details: John Cale and his mentor tuning their instruments to the hum of the fridge: I know that thing! Dubulah and Simon Walker used to do that, and I always thought at Millwall matches the chants started in unison in 'G' because the fans had shaved before the match and kept that pitch, entering through their jaw bones, in their heads. Cale has really good recall, and at times the film was his; but really, it was pretty even-handed with only Sterling Morrison's story being absent, although his wife was there to tell parts of it.

We heard the Primitives' song Do The Ostrich and what appeared to be an almost country-style early version of Waiting For My Man which was talked over (sacrilege!). We heard about Lou Reed parting company with Pickwick Records where he was a staff writer because he wanted to write miserable songs that told it like it was.

Mo Tucker was really funny, saying how much they all hated hippies when they went to California, and how useless a flower is when someone's pointing a gun at you.

And there was Nico of the beautiful voice, and Andy Warhol exploiting everyone's vulnerability. It was a really absorbing and interesting movie. Then something in real life went wrong, and all we could hear was the audio, and then nothing. The cinema sorted it out and it started again, but by then I had a humdinger of a headache and came home.

On the way back I realised that I'd left Summer of Soul early, too. Maybe I don't like getting to the end of films because I don't like things ending. There has been too much 'ending' in the last eighteen months, and I've had enough of it.

Back to work tomorrow, up really early. I think I am going to go to bed now even though it's just after 6 p.m.

Anyway- here's a Velvet Underground song I recorded (for the third time!) because I love the song so much. Of course Nico does it a thousand times better, but it's just such a gorgeous song. The Mexican zine Pintalo De Negro asked a bunch of musicians to record their favourite Velvet Underground song to go on to a cassette they're releasing imminently with a new issue, and I did it for them, with Ian Button and Robert Rotifer on backing vocals. The film is by Damian Cosmas.

ok - I need to know - how did you manage to look straight down the lens for almost 5 minutes without a fit of the giggles (which, I admit, I was half expecting)? Anyway, now my soul has been sucked out...

Hi Helen, Nico pronounced the title 'femme' in correct French. So did Ari Up of the Slits in what I consider IMHO the best version of the song https://youtu.be/8gJRPIlTOEA While Debbie Harry and others mispronounce as 'fem'. Probably because of more French lessons at the German schools of Nico and Ari than in the USA.