Yesterday's theme was children's TV shows of yesteryear, and I had a very pleasant hour or so in the afternoon looking through old TV shows to find suitable stills to draw from. I chose this one to work on, all my resolutions to draw in black and white, and to do more than one drawing during the session, going out of the window as the banter flowed. This was actually a particularly weird episode of Crackerjack: the very reluctant-looking boys had to roll around on the floor until the balloons burst, and the first boy to burst all the balloons won the competition. I noticed that all the Crackerjack competitions involved humiliating the children in some way, and from the expression on these boys' faces, they were aware that they were just about to be mocked on live TV. It almost seems as though they were sent to the show by their school (they are in uniform) as an alternative to being caned. The challenge of drawing the balloons was really enjoyable, but now I'm worried that the boys were scarred for life by the experience. I wonder where they are now? 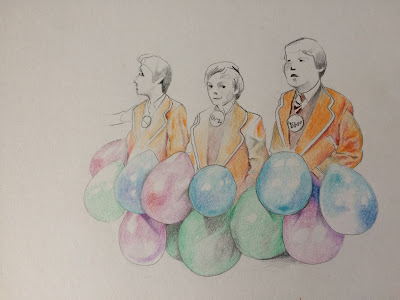