Very often life seems surreal. A family member is in hospital, which is worrying. The night before last, I could not sleep for a long time but finally dropped off. A 'ping' woke me at 4 a.m. and I feared the worst, but it was a songwriter that I used to work with Whatsapping me from California to tell me how happy she is with what she is doing.

Last night I woke up at 4 a.m. too, my body clock having already adjusted to the new waking up time.

The past two days I have been back at work, once virtually and once in real life. It takes a million years to get to Docklands by public transport but it's quite spectacular once you are there. The little Docklands Light Railway rattles along through construction sites scrabbling about next to newly-constructed flats with unified balconies: I have decided they are populated by fake people to make things look good.

I saw these chaps on the platform at Bank but was too late to photograph them, I thought- but then turned my head and there they were, travelling to St George's, they told me. Two Pearly Kings, not wearing masks but socially distanced. Some wag asked me if they were using Oyster Cards! 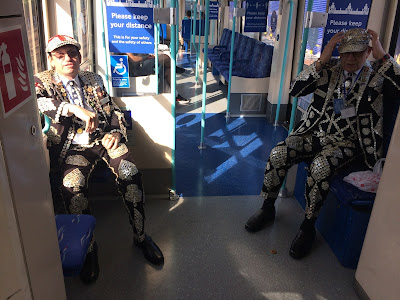