It's so easy to overlook this little outdoor theatre. I remember the first time I went there, to see A Midsummer Night's Dream, when I was amazed by the romantic setting: as the play progressed, dusk fell and pinprick lights illuminated the grass banks on either side of the stage, echoing the pale stars in the sky. You can hear London's faint roar in the background and feel its atmosphere in the air.

Since then, I've seen that play again there, and also taken the young Offsprogs to see a production of The Pirates of Penzance, through which the animals at London Zoo must have had a rollicking, roaring, chirping, growling, howling singalong each night.

Every summer it lists itself in my head as a possibility, and gets forgotten. But the imminent return to work, plus a good review of this show in The Guardian, encouraged me to buy tickets. Yesterday of course was spectacularly rainy, and I was half expecting it to be cancelled, but the rain held off and we made our way through Regents Park, marvelling at the lovely smells and the peculiar drooping mist that hung around the topiary. The roses were out in all their soggy splendour, and we took a sniff as we passed by.

A powerful persuader for going to this was also the fact that it's outside. I am not taking any chances at the moment because people close to me need to be safe; although masks are mandatory on public transport I have to constantly move to get away from people who think that covering their noses and mouths is a challenge to their own civil liberties, bypassing the fact that the risk of passing on a deadly virus to vulnerable people is much more than an offence to those people's rights: it might possibly kill them.

People were well spaced out last night and we sat together in a huddle. The sightlines there are great anyway; you can see from wherever you sit. We ate ice creams and the metaphorical curtain rose: the auditorium lights went down, and the stage lights went up. A group of brass players appeared and played the Carousel theme, and off we went.

I'm not a habitual theatregoer and I haven't been to a musical for a very long time, so my impressions are really biased. The show seemed to take a long time to get going, because there was a long music and dancing section at the beginning. I wanted to see the band during this: they were working really hard and I longed to see who was doing what and when. I know there is really limited space there, but in a real life musical as opposed to a filmed one, everything is an asset and provides an opportunity to show more of the workings of the show. On the plus side, the singers without exception put vocalists in pop and rock music to shame. They were note perfect. Every time I winced expecting a top note to be missed (I know the pattern of song writing in musicals so well), the singer hit it bang-on with headroom to spare. Not only that, the vocal tones were lovely: there was very little 'belting', and even the aural exciter (or it's equivalent) couldn't mask the fact that there were some very beautiful voices indeed here, coming from singers absolutely revelling in their craft, and being delighted to practice it again after being in lockdown.

The story had been adapted to take away the acceptance and tacit approval of domestic violence that resides at the heart of the original musical. It wasn't a send-up, more of a conscious revisitation of the original narrative. The costumes... well, again, I am biased. It did look terribly like a University arts department staff meeting, a bit of a Toast catalogue of muted tones, oversized dresses and baggy trousers. Tame hipster for the men. Again, this toning down of the razzamatazz was a comment on the glamorisation of a working-class fable which probably worked for audience members who didn't have regular meetings with East London music, drama and dance lecturers. I kept seeing my colleagues in the characters, and had to fight against this familiarity quite hard.

So what is my overall verdict? Actually, this was a really great night out. As a person with a very low patience threshold, I never disengaged. The venue felt safe and open, even the eating and drinking areas. People were respectful of distancing. In the musical itself, there were some slow bits, but enough humorous parts to override that. And the singing of You'll Never Walk Alone was gorgeous: the woman who sang that had an entirely different voice, much deeper and more powerful than the rest of the cast. She avoided drama, vibrato, or fake emotion and sang it into the crowd as though she was singing it to the whole world. Fantastic. I remember that song being sung at Poly Styrene's funeral by Celeste, her daughter. It is a very hard song to pitch, and a very unusual song melodically that you can imaging being written in a one-off session. It was the moment of the night.

I want to go again!

On the way back to the tube station, we speculated about football crowds singing Rodgers and Hammerstein songs at matches. What would be the most inappropriate one? We settled on My Favourite Things. The thought of a stadium full of rufty-tufty men singing 'Raindrops on roses and whiskers on kittens, bright copper kettles and warm woollen mittens..' in unison through their beer and testosterone made us roar with laughter, and one of our party resolved to apply to The Arts Council for a grant to make it really happen. 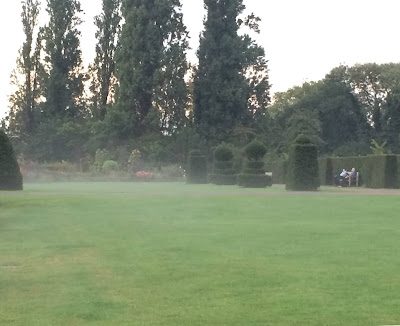 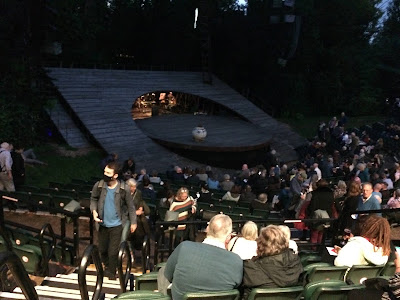