Herons, Earrings and a Fantastic Film

I went on a fruitless search for a shop that would sell a single gold hoop earring.

Two weeks ago I went to see Summer of Soul, which has to be one of the best films ever. Not only is it an excellent music documentary, it is also a film about political action and possibility that speaks to the nature of racism and the ghosting of its even existence, let alone an entire New York community who set up and attended a concert in Harlem that now, it seems, was intended to be forgotten.

Nina Simone's blazing anger, Steve Wonder's positive and uplifting songs, Hugh Masakela, Jesse Jackson, Mahalia Jackson: all ages were represented and celebrated in front of a delighted audience, some of whom climbed up trees for a better view. The neighbourhood's kids were there, having their own experience at elbow level. It is a fine and moving film which I would love to show to my students if I get the chance. Do go to see it if you can; you will feel moved, angered, energised and most importantly, educated in the best way possible- through musical experience.

The earring was a mask casualty. I put on my best dress and posh earrings for the occasion even though I went on my own, and at some point I must have taken off the mask in the street and also unhitched the earring. I guess eventually I'll have to just buy another pair. Sometime.

The earring search was yesterday, on the way to visit my pal who has had a broken leg, ironically while feeding a goose with a bad leg in Wanstead. She sped through the low traffic area in her wheelchair, decked out in camouflage finery with large matching umbrella tucked behind her and a backpack full of duck biscuits. Once we were at Wanstead Flats, we fed Egyptian Geese, Canada Geese and a very friendly and greedy white duck from the flats of our hands, getting the occasional nip in the process. In the distance a woman appeared and scattered a huge amount of wildfowl food on the ground and massive flock of mixed birds appeared, including a heron who stood in the shape of an imperious number seven and overlooked the proceedings. A cormorant relaxed on a small island, at one point inspected by a curious swan.

Wanstead Flats could not be more different than Barnet. For a start, it's flat! The grass is beaten down by footfall and there's a visiting Fairground set up across the way. Yet all around the pond there are masses of colourful wild flowers in tufts and tussocks where little chicks can hide from the marauding seagulls. It looks like a children's painting of the ideal pond.

So that was yesterday, and today will be back to recording. I've had a week off from listening to my own stuff and I'm going to re-record some songs with different guitars. They need grooves, and I will have to re-string the bass and get grooving.

Here is the heron flying away to find rats. 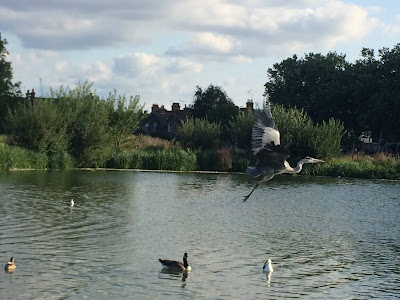 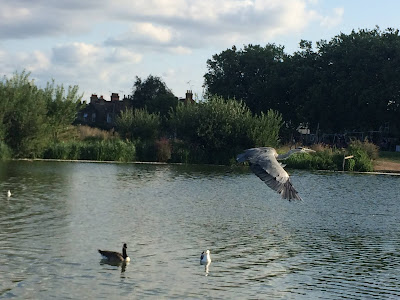 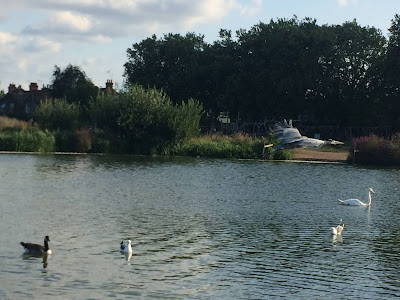