Walking and a Heron 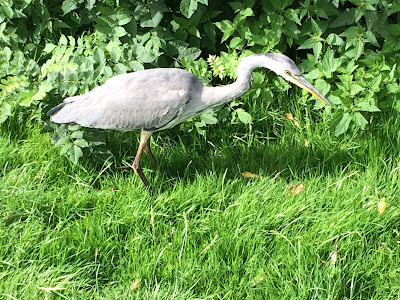 Not for the first time, when I saw this huge prehistoric monster I thought it was a statue standing on the grass by the path. I'd gone for a long walk because I knew I'd be recording this afternoon and I wanted a clear head with no anxiety.
As I rounded the corner, there it was, just standing there. An elderly man walked past it with centimetres to spare, but he was deep in thought beneath his baseball cap and didn't even notice. I managed to get within about a metre and a half, although the bird had it's beady eye fixed on me the whole time to make sure I didn't fling a net over it's head. It was looking for insects and worms- it jabbed the ground really hard with it's beak at one point. The water up here is like thick green soup and I don't think there are any fish or insect larvae for any of the birds to eat. The ducks and geese up at the ponds are probably OK for a while because they get fed oats and bread by visitors (and so does a rather impressive giant rat).
Anyway, eventually I got just too close and it took off slowly, flapping its massive wings and landing not much further away. If I had been a bit smaller it would have eaten me, I'm certain.
I'm just taking a break from editing a song that I've been working on with Michel Wallace. I want to export the tracks to send to Ian Button to mix but I can't remember how to do it, so I've had to write and ask. Ricocheting in between academic writing and writing and recording songs is such a blessing but it involves wearing a lot of hats inside the head, kind of thing. You never stop learning though- I think I may become a better guitarist as a result of lockdown, and I've built a better relationship with Logic and its peccadilloes.
Funny using the kitchen as a studio. I'm on stickiness alert and I have to let as much air into the room as possible. There's no space anywhere else, no room in the back yard for a shed, and the kitchen's got the best acoustics anyway because of the hard surfaces.
This is not a problem the heron has to deal with. 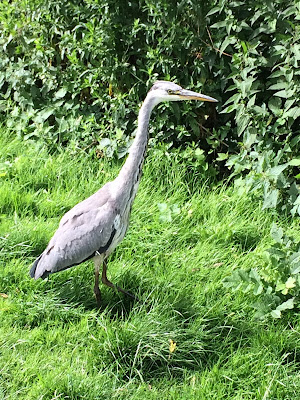 Wilky of St Albans said...
This comment has been removed by a blog administrator.
5:51 pm