Bloody hell, I've started writing like a newspaper columnist on the Evening Standard! Sorry about that if you were subjected to my bustling prose in the initial posting.
On Wednesday I chugged up the road with my amp on a trolley to the King and Queen in Foley Street, to play at Amy's Lounge. I took photos, but they didn't come out very well (the pic is of Amy) because everyone was standing in from of the window. It was lovely to hear Amy sing her acerbic songs again, and to be introduced to her singer friend Matilda Eyre, who sometimes plays a synth but was playing an electric guitar that night. She too sang gorgeous songs. 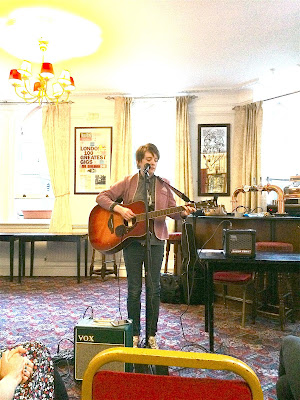 Paul Eccentric was on next. I have missed his poetry and Donna too, and on Wednesday evening we were all riveted by his hilarious grammatical complaints letters to Tesco and anyone else who dared to write 'less' rather than 'fewer' in their ads.  Foolish Girl it was great to see you, and of course Ted. What a nice surprise. Sorry to be a bit of a Pollyanna, but in a life of extremes you've got to enjoy the good bits.
I thought Thursday would be a day off but my inbox had filled up with codas to things that I thought I had finished, so I lumbered through all that (including learning how to remove editors comments from a Word document that had been marked up using an incomprehensible-to-me part of the program), then tried to book a few days holiday in Lisbon.
Halfway through, I got cold feet and decided to go to Whitby instead, so that's where I'm going. I have my bucket and spade and my ugly swimsuit at the ready, and I hope to be living on a diet of fish and chips and Mr Whippies for the whole week.
Today Gina and me were supposed to be filming ourselves, but we had to do a bit more editing of the work-in-progress to send to a film festival in Philadelphia, and we also had to do a bit more work on our Kickstarter trailer. Everything has to be right...
Once that was done, we started filming ourselves. Gina was going to dye my hair blue but instead we filmed a guessing game, interviewed by her daughters, that ended up with us splatting handfuls of whipped cream in each others faces. Instead of coming home with blue hair, I came home smelling of sour milk.
Poo.
Oh yes, and on the way there I watched this man fixing one of my fave features of the Holloway Road, the sempervivum cat. 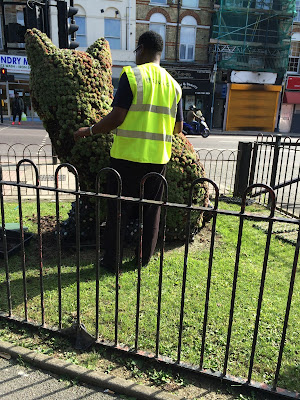 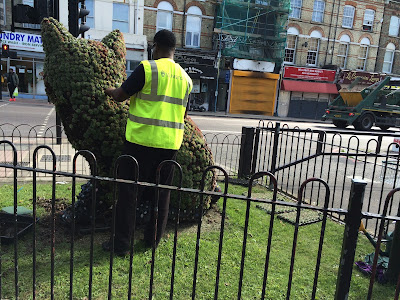 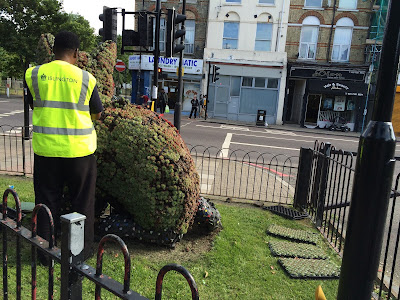