An Afternoon at the BBC

In a completely different strand to the British Library and Stories from the She-Punks, I was invited to be interviewed by Samira Ahmed at the BBC this afternoon. Jess Allanic was there too, to represent young punk of today. The other person who was interviewed was Hazel O'Connor, about the film Breaking Glass, but that happened a couple of weeks ago.
I took this photo in reception today. 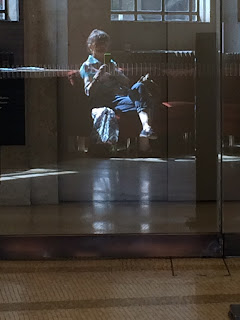 What a nostalgia trip. Some time in 1980, The Chefs had been having their photo taken in the West End by a food photographer to was hoping to become a rock music photographer. We ate the day's curry (still warm) and afterwards me and our manager Jonathan went along to Portland Place because a band we'd played with at The Moonlight Club, The Dancing Did, told us they'd got their record played by standing outside the BBC at 9.45 and waiting for John Peel to walk past for his show at 10.00.
Sure enough, he came in on cue, and said 'Come up to the studio!' I had been writing to him for months but hadn't expected this. we followed I'm upstairs and he put the record on almost straight away. I talked over it at first because I was so embarrassed in case he didn't like it, but he did- and he went on to play 24 Hours loads after that. What a gem he was.

And 'Fans' like me came to see you at (almost) every Gig!