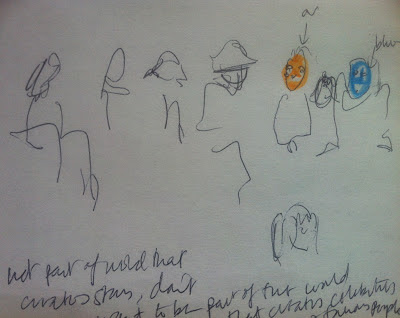 Some might say it is postmodern, but actually The South Bank was chaotic  yesterday afternoon. Families collided against each other, and young people with clipboards clutched to their chests like shields looked anxiously for others whose t-shirts matched their own for a sense of community. People sat at tables with leaflets, and a Steampunkish man made announcements through a loud hailer, while simultaneously being photographed and filmed as he apparently gave a running commentary on what was happening now (or should that be 'what is happening now'? Dammit, the moment's passed). Add intermittent showers to the mix and some very firm-to-rude security guards at the doors of the Queen Elizabeth Hall, and it was tempting to go home.
But I didn't want to leave without a copy of Let's Start a Pussy Riot in my hands and I'm glad I persevered: and I'm also glad I had the patience to attend the whole event, the launch which had occasional clunky moments and occasionally prompted me to question what artistic freedom is about.
Emily Neu, who put the book together (what a feat! it is a beautiful book) and the editor Jade French (much hard work!) sat together and talked through the process of creating the book briefly before inviting Fox, who had appeared an a Channel 4 TV programme about gender realignment, to talk. Fox has artwork in the book and he is a guerilla artist, pasting photographs of transgender people in public loos. He was joined by Finnish musician and film-maker 'E' who showed a film that told the story of a motley crew of presumably gay men being interrupted in their revels by a group of white-clad homophobic religious people. What bothered me was that the first punch was thrown at a woman, by one of the men. Elias was asked about any controversy thrown up by the film and he said it was mostly to do with the smoking of cigarettes by the actors. I found the film upsetting, because alongside the thread about celebration of (male) gay lifestyles was one of violence against a woman.
I think I was primed by the horrible exhibition that I wrote about yesterday to notice things like this.
However, these feelings soon vanished as Katya joined us via Skype for a very short interview. My skin began to tingle- I found this a profoundly moving moment and I actually started to cry. They have been so brave: witness what has happened to Litvinenko and various other Russian dissidents. I am certain that it is only the international attention that we give to Pussy Riot that keeps them safe. Katya looked so young and vulnerable. I hope she heard our applause.
Then two members of the Pussy Riot collective joined the stage, with their translator (who did a fantastic job). This was truly bizarre. Wearing balaclavas as part of their stated desire 'not to be part of a world that creates stars, celebrities and famous people' (and also I imagined, for safety), they spoke through voice changers and an interpreter (whose voice also took on the Dalek timbre from time to time as she swopped microphones). This was political performance art; occasionally their wisdom was punctuated by a giggle, rendered sinister through the voice-changer. Their message was of individual empowerment: 'We look on our actions as a fight for art'. An audience member asked them if they were afraid when they protested.
'Our actions are more important than fear'.
One of the many reasons that I support Pussy Riot is that they have picked up something that surfaces at times in history and made it their own: the desire for change, and the feeling that the potential for change resides in each individual person in every aspect of their lives.
I felt this at the age of 5 when I was taken on an Aldermaston March by my parents against nuclear weapons. It was embodied in punk and has recently erupted in communities across the world.
This feeling should not just belong to young people. We should never stop caring and never become complacent.
Incidentally, they told us that under Russian law, a prison sentence can be postponed until a convicted person's children are 14 years of age. This makes the incarceration of Nadya, who has young children, all the more brutal. She has only seen her children once a year.
So, to go back to the Finnish video. I have been thinking a lot about artistic and political freedom, partly because of a concern for the proliferation of pornography on the internet. It is difficult to work out what to think and how to articulate it. Perhaps today's personal position is that people who use artistic freedom to abuse other people are abusing freedom itself. But then where does this leave me, the creator of Boriceberg?
The sketch above was drawn because we were not allowed to take photographs. I was going to draw a more finished one but this spontaneous scribble seems more free!
Book available here: http://store.roughtraderecords.com/Store/LetsStartAPussyRiot.html
Posted by Helen McCookerybook at Sunday, June 16, 2013