Last night there was a celebration of Pat Fish's life at The Dublin Castle in Camden. It was a freezing night but the venue was warm, not just in temperature but also in mood. I can't write much because I'm getting ready for tonight at The Lexington, but the extent of musical co-operation was extraordinary. Jazz Butcher drummer Dave Morgan has rehearsed a backing band for many of the acts (which included Heidi Berry, who was in fine voice). Sets were two to three songs long, and master of ceremonies Jem Price threaded his good humour throughout the night and sang three of Pat's songs himself. 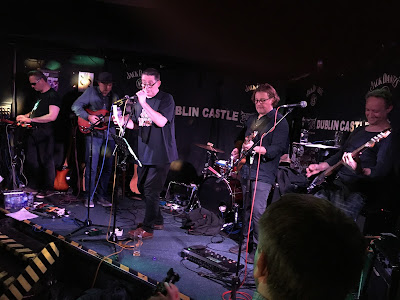 I met Pat at a gig with Asbo Derek in 2019, coincidentally at a gig at the Latest Music Bar. He was a gentleman, playing solo to a boisterous audience who settled down and listened with great interest once Simon Rivers (of Bitter Springs fame) intervened and told them to listen to this great song writer. I think everyone needs a Simon Rivers to do this for them at some point in their lives. And of course, once people listened, they were won over by Pat's distinctive songs.

The stage was full: bass players, guitarists, keyboards and on one occasion, two drummers, who covered not only some of Pat's songs but also songs by artists that he liked. I contributed a version of Femme Fatale helped by some very lusty backing vocal singing by the audience, who clearly needed to express how they felt in a positive and vocal way.

Returning home early because of Covid worries, we watched the rest on live stream from the venue and caught Pete Astor's set onwards. Although I believe the internet cut out part of the way through (Heidi's and mine bits: designed by men? I think so! Ha ha!), the stream will be on Facebook to watch. However' I'd prefer to share a film of Pat from the Latest Music Bar that I recorded on the night: