Pity Me, The Cat Got Me

Our beautiful Siamese cats had unfortunate hunting habits, no matter that they were fed and loved. it's just their way.

I used to bury the carcasses, and occasionally dig them up to see...

I've been doing this embroidery since 2001 and never felt that I had the time to finish it. The skull, I sewed freehand so it is entirely anatomically incorrect, but it is done from life (or perhaps death).

The cats, of course, are also no more. One by one, they became ill. I always felt that they were such shock-absorbers within our family that eventually they wore out. They were so loved, and every so often we talk about them still and the silly things that they did: like one of them coming through the cat flap with a huge clattering because they had caught a mouse: a dead one, complete with the mousetrap that had done the first and lethal catching.

And now, I've got to finish my book. Amazing how far one will go in order to avoid a difficult task! 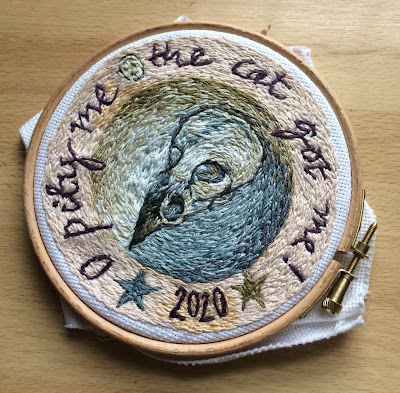