After A Walk In The Woods

Saturday's walk in the woods was remarkable. At one point the cacophony from the birds sounded like a tropical rainforest: there were so many different calls, and such a quantity of birds, all in a slice of woodland between two golf courses and only a stone's throw from the M25.

It was also Giant Hogweed Eradication Day- except boots aren't really enough. Protective gear is a better idea, because they are poisonous and their poison droplets spray into the air if you trample on them.

Today was writing with Robert day. He arrived with his guitar and a box of cakes and believe it or not, by the time he left we had five almost-songs in the bag. I almost didn't mind that we might not be able to play in Vienna, because Austria has banned British flights. Thanks Boris Johnson, for reigniting the flames of Covid by waiting two weeks before banning flights from India. Thanks for that.

We will be match fit for whatever gigs arrive in our inboxes. It's a workout for the hands learning another person's chord palette, but I feel so lucky to be collaborating with a song writer like Robert. He has the ability to weaponise language where necessary, or be a true poet when the mood takes him. It has been hard working day interspersed with some late marking, but the internet packed up and isolated both of us from our real lives so we ended up just getting on with it all. I've got a pile of lyrics to learn and a separate pile of chords, and so has Robert.

Tomorrow I'm going to Joan's to work on our collaboration. My whole blood supply has been replaced by creative juices, and I'm not complaining. And here's the poster for our gig in November: 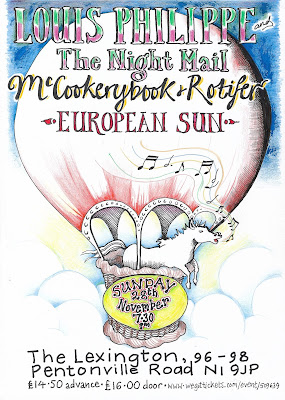