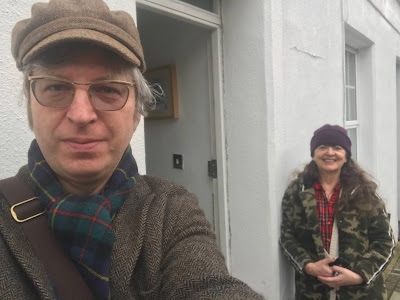 Robert passed by at a distance today to drop off my equal part of the Equal Parts E.P.

I've got boxes in the front room! We can't tour it yet, but we have sold a few on Bandcamp (thank you, if you're reading this and you bought one).

Meanwhile, Willie Gibson and me have just finished an E.P. too: Electronica Botanica, if you want a genre. It's analogue synth and singing, and has been a wonderfully different project to work on and should be released later this month. Apparently he put Fairlight parts on to one of the Madness albums. Isn't it odd to work with someone you've never even met? We spoke on Skype once ages ago, but everything on our project has been done by exchanging files.

And Robert and me have more songs in the pipeline. If we get to gig this year, we will have a full set of songs. I'll have to get to work on those bloody awkward chords again but boy, I've learned a lot through these collaborations! I've had to really work hard at my playing, and I've also had to learn to record my vocals so they leave the house exactly as I want them to sound. The powers of concentration have never been called up to such an extent as during these lockdowns, and I have bought two sets of headphones: one for recording and one for mixing. Fancy that! Maybe I should become a dedicated vocals producer.

That's it for now; I'm under the weather again today, propelled along by anti-emetics, and I've got admin to do. I remember working for Southwark Council once and looking out of an upstairs window. There, on the flat roof, was a huge sheaf of files fluttering in the rain that my predecessor had filed exactly where they thought they belonged.

I thought that was funny, in a rather awful way.