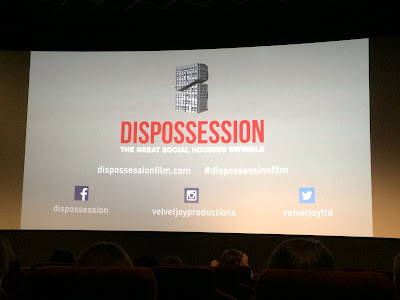 Paul Sng, the director of this documentary, made the film Invisible Britain which followed Sleaford Mods around Nottingham's gigs and pubs, and documented them talking about their music and their political beliefs. He advised me and Gina about our funding our fledgling documentary (still parked up in a lay-by temporarily), and in a strange way I was worried about this film, in case it didn't deliver the goods, despite reading some great reviews in one of the weekend newspapers.
There was no need for anxiety. From the start, the documentary has the self-assured focus of truth, and what a f*cking relief. There is no pussyfooting, no euphemism, no delicacy: but there is no brutality either. Where there is anger, it's completely justified and more often articulated through the poetry of ordinary (yet extraordinary) people's reminiscences and their hopes for the future.
The film interrogates the local and national policies of powerful politicians of all political persuasions as they cleanse city centres of people earning below certain income levels- certain high income levels. These people have/had been living in high density, sometimes high rise, council properties on land whose value has apparently become higher than the value of the lives of those people whose homes are built upon it. Under the guise of regeneration (an architect from Architects for Social Housing debunks the idea of regeneration, which is a slow process, and prefers the term 'clearance'), whole mini-populations are persuaded to leave their homes, which have been allowed to deteriorate over decades, and promised lovely new dwellings. In reality, once these new dwellings are built, there are simply not enough of them for the evacuated residents, and compensation paid to leaseholders who were conned into buying their council properties by Thatcher's government is nowhere near enough for them to live in the 'affordable' properties that replace their original homes.
Naturally, very few of those people responsible for these policies consented to be interviewed, and  Savills, the property developers, have somehow managed to become advisers to government and councils without any sort of checks and balances- shame on you Sadiq Khan for being involved in this!
Parts of the film hit the emotions hard. It was the resident of a high-rise who talked about moving into his flat after being homeless, and watching the fog from his windows, that made me cry. As he spoke, his words were akin to a loving poem to the view from his window; it was a beautiful and touching moment. Later a Glaswegian man stood in a rubbish-strewn street in a part of Glasgow whose private landlords have allowed it to become a slum with piles of rubbish and rats (I think this may be in Nicola Sturgeon's constituency). Incredulous, he imagines the journey of a refugee form a war-torn country arriving in Glasgow for sanctuary and ending up in a sh*tty street like this, where the situation is almost as hideous. I thought of the man from Glasgow whom Emily Maitlis had interviewed and who reduced her to tears by his generosity in donating blood to victims of the Manchester bombing, and whose response was to answer hate with love.
All over the UK, the story is the same, whether Manchester, Glasgow, Nottingham, London...
we learned about the process of artwashing, where arts projects (even graffiti artists) form part of the first stage of social cleansing by making areas look funky and desirable. Interestingly, after the screening a resident of one of the estates in Southwark remarked that the film, in being shown at a Picturehouse Cinema in central London, was actually taking part in this process too. This was a sharp observation- but it allowed some interesting responses: the staff at the cinema who are undertaking industrial action because of their low pay were asked how they felt about the film being shown there and they gave the screening their blessing. In addition, Paul told the audience that once the screenings are done, the film will be sent out to any residents association who wanted it free of charge, so that they can use it to support their campaigns against being ousted from their own homes as the end-product of a 'managed decline'.
In the Q&A, the views expressed were frank. This is all part of the financialisation of even our imaginations; and this removal of poor people, facilitated by the myth of sink estates, is known as 'value uplift'. Ugh, ugh, ugh! How horrible!
You must see this film. The residents are articulate, funny, charming and strong: they give the message of the film such heart. The graphics are clear and the research is thorough and convincing. It belongs in the same area of truth-telling as I, Daniel Blake, although that is fictionalised truth. Despite making you feel furious at the injustice and hypocrisy of the politicians, construction industry and financiers, there is a sense of relief in the film's honesty. This is information we need. A decent life for the many is superseded by an aspirational life for the few: we can't let this continue.
See here for more screenings: https://www.dispossessionfilm.com
Posted by Helen McCookerybook at Monday, August 07, 2017