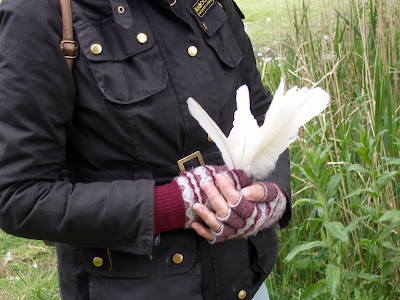 Mrs White Goose was snatched by a fox last night, despite Mr White Goose's ability to clearly articulate the words 'F*ck off' if anyone got too close, and to see off any marauding dog with a flurry of beating white wings and aggressive hisses.
"How did it happen?", socially distanced lockdown goose fans speculated.
I had reported a couple of men with a lethal-looking black metal catapult to the police a few days ago. They were actually back in a car this time, but this slaughter really looked like the work of a fox, because it was obvious there had been a scrap that pulled the poor old lady right over to the edge of the common. We couldn't work out what had happened to the eggs she had been sitting on, and how the fox had got at her while she was in the duck house, either.
The Mandarin Duck and his wife sailed happily on, oblivious to last night's drama. He reminds me of a Cyberman with his beady little eyes peeping out of his helmet.
Apparently the Egyptian Geese at the main pond had started with eleven goslings, and have managed to raise seven of them. The fox was down there yesterday, but only managed to catch a couple of pigeons, whose pale grey feathers larded the grass patches in two guilty spots. We think the fox has cubs to feed.
Oh nature, thou art cruel!
At yet another pond (there seems to be a new pond every walk-time), the one with the African Ducks,  Mrs Canadian Goose (who was sitting on a nest two days) ago now has six bright greenish-yellow goslings; Mr and Mrs Moorhen have at least four stalky-legged moorchicks, and another moorhen is sitting on a twiggy nest that she and her mate have wisely constructed right in the middle of the pond.
It's all go in Barnet Birdland, believe me.
I'm not sure I can take this rollercoaster of life and death. It might be time to find another route to walk!


Posted by Helen McCookerybook at Wednesday, May 13, 2020