Maybe it's to early to 'assess' the day.... I managed to read and take notes from three academic articles this morning, went shops, and then lost my drive for writing!

This afternoon I realised that I have to write out the chords for my songs for this gig at the Lexington on 21st of March, because (thanks to Drew Morrison of Country Soul sessions fame) I have recruited a double bass player. I had double bass playing on the Suburban Pastoral album and also the Christmas Assortment EP, and have used cello quite often- live, too, when I first started up again in 2006. But I've never played live with a double bass before, which is exciting and scary in equal parts.
Transcribing chords takes a long time, because I don't pay attention to what the chords are when I write songs: I just play what sounds right, and even make up chords if I have to, which is awkward it you're trying to tell another musician how to play your songs. I've done two so far, with another three almost done. I might send those ones off tonight if I can finish them, and then go back to academic writing tomorrow.
Work has started up again, too which means that it's going to be bloody busy, but I've been bloody busy before and managed perfectly adequately. 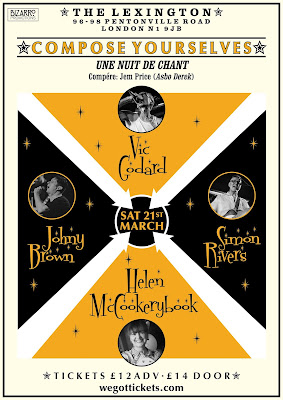