On Thursdays I get up at six: if I leave the house too late it takes me two hours to get to work because of the crowds of people.
This morning, I woke up at 4.30.
A bird was yelling at the top of its voice in the garden next door, and I couldn't get back to sleep.
At about 5.30 I gave up, and got up.
I was suspiciously energetic, but headed off to work unfeasibly early. I spotted this in Camden: a half shod woman must have stumbled home last night. Nobody else appeared to notice it but it was there, definitely.
There wasn't even time for a tea break today; there were 12 tutorial slots of half an hour each, with extra people in the no-show gaps with queries and stuff like that. By 3.30 I was half dead; the suspicious energy had gone, but I still managed to remember to book a rehearsal for me and Johny on Monday evening so I can learn more of Johny's songs. And I found a song I'd blearily sung on to my phone at some point during the day, I don't know when.
It's early evening now, and I'm ready to sleep. Tea is on the go, the TV is swinging between mute and not (too many Tories: Laura Kuennsberg, Laurence Fox, Emilia Fox.... there's nothing I can watch any more!).
Where's that detective novel? 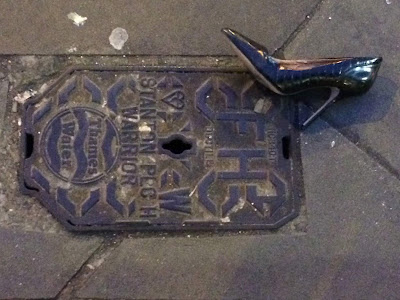