The Lovely Basement in Easton, Bristol

Somehow I'll catch up with what went on at the weekend...
Here's a little video of the Lovely Basement on Friday. Such songs! They played a particular beautiful new one about Lake Ontario where the twin guitars spoke to each other in a perfectly... well, lovely way. The bass player's ten year old daughter helped out on percussion (you might see her with her pineapple shaker in the shadows).
Thanks for coming along Rocker, Mark Wainwright and Tina from the Brighton punk scene (we haven't seen each other for 30 years) who looks about a year older than the last time we saw each other. And thank you to the couple who gave me a lift back into Bristol- I'd got lost on the way there after receiving directions from a woman who thought left was right, a man who thought a flat road was a hill, and a phone satnav that got even more lost than I was.
It was nice to play Big Brother Is Watching You as an encore, in response to The Lovely Basement's social media song. I haven't played that one for a while.
Big luv to The Lovely Basement for inviting me over!
The fairy lights around the microphone stands were perfect. 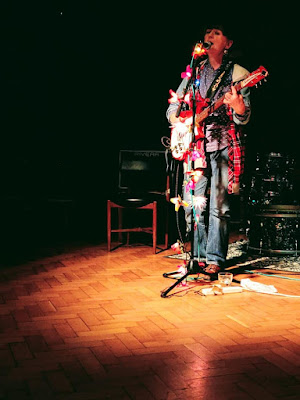