Helen and the Horns Paraphernalia

Well, I've been diggin' in me own crates and I've unearthed lots of old stuff yet again: this was a press pack that was sent out by RCA in the mid-1980s with photocopies articles, a biog and a 7" vinyl record of Footsteps at my Door. They did a quite a good job of all the design work and nicked the tinted-photo retro idea for a group called Modern Romance which annoyed me at the time because I'd asked them to do it. But they took the idea further themselves and used a retro RCA single-label from the Elvis era so I didn't fume for long! 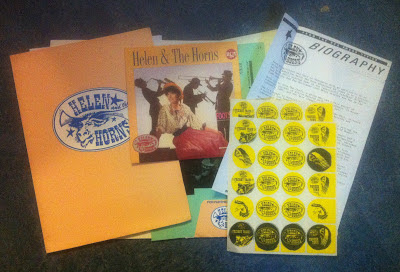 I loved being in this band. We did a lot of gigs and they were fun- they were a cheerful bunch onstage and good fun off it too; very odd by some people's measures (two scientists in the Horn section, a female live-sound engineer, no bass and no drums...).
We toured up and down the country and supported all sorts of groups- Mud, Mary Wilson and the Wilsations, The Orson Family (actually I think they supported us) and even Roger McGuinn at the Town and Country Club. John Peel and John Walters liked us enough to give us three sessions and a live ICA gig too (you can hear a track at www.myspace.com/helenandthehorns).
I also found an original Chefs t-shirt which is very crumpled. It's back in it's box but I'll photograph it at some point and post it here. As I remember, they sold out in moments, but mainly because they were yellow, I think!
Posted by Helen McCookerybook at Tuesday, January 29, 2013

Thank you Richard- they were such fun to do!