After a couple of hours drawing, I was really for a rest from the week, so for the rest of the day (aha!) I took time off to socialise.

Gina has been working very hard and very successfully over the last few months, and as usual the traditional 'going out for lunch to celebrate her birthday' was a little later than her actual birthday. We went to Mildred's in Soho, the original vegetarian restaurant which now appears to be vegan. Quite a lot of the bits of the different dishes on the menu weren't available (I presume because of supply-chain issues, because we were very early and they couldn't have run out of them at that time), and having been scared by the waiter that what I'd chosen was extremely spicy, instead I chose fennel sausages and mash. I have hated sausages for a long time, and basically ordered them because the dish looked simple. Much to my surprise they were absolutely gorgeous and I scoffed the lot.

Gina suggested that we went to Third Man Records, who she's now signed with. They are Jack Whites' company, and having missed her single launch on Friday last week, she wanted to give me a copy of her latest single, Wish I Was You/No Love. What a snazzy shop it is- all yellow and black, very wasp! Everything in the shop is in identical shades of those colours, even the turntables and the very stylish clothing. We chatted in the basement about her forthcoming interviews and releases; things are going to be really exciting for her in the next few months, and not before time. She has grafted hard on her music and art for a long time, and I've seen how both have flourished and consolidated into really interesting and vibrant work.

We went for cake in the pinkest cake shop in the world. The pink was lovely but the cake wasn't, really. It was all designed for Instagram, except you couldn't take photographs because there was some sort of light filter that made photographs come out a dull green colour. Oh dear, such meanness! No name-check for you, swanky cake shop!

I rushed back home to have a Zoom meeting with the author of the children's book that I'm illustrating, which is the first time we've spoken in-almost-real-life. It was a lovely conversation and I'm glad we did it, because I now feel I've got more insight into the book and how it should be. I ought to be working on it now even though it's Saturday, because I'm re-drawing whole pages sometimes. But Come Dine With Me is on. If the people aren't nice to each other, it's back to the drawing board.

Next bit of yesterday's social day was going to Scaledown. I haven't been for ages, and there were lots of people I knew on the bill. I was keen to see at least some of them before the later errand of the day, and I managed to catch the mini-concert on toy piano, which was fabulous, and Felix Mackintosh's experimental dub disco with vocals by Leoncia Flynn. I had a nice chat with Kevin and Mark, and almost ended up filling a space in the bill, but didn't have my guitar to do it. I missed Bettina Schroeder and James, Lucy Sieger, and Lee, Cos and Marina but I know there are more gigs for all of them that I can catch soon. Bettina gave us all a link to her latest musical collaboration with Xqui, who coincidentally has just done a dub mix of one of my own tracks, which I'll post soon. Nice to see Peter Tainsh out too. 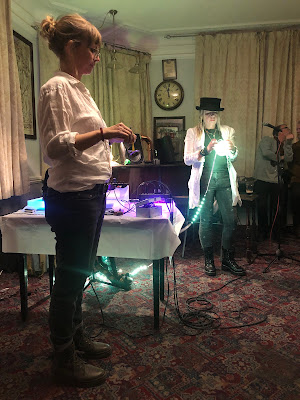 Thanks to the Elizabeth Line, I was in Farringdon in the twinkling of an eye. I roared up the street to The Betsey Trotwood, did my drop-off, and went upstairs to the Papernut Cambridge album launch. It was very full up there, and I was nervous about the crowd, but eventually I opened my eyes and sat next to Kieron Phelan, where I noticed Judith, Oscar, two Kentish Roberts (Rotifer and Halcrow) playing with Ian, and Pete Astor and various other familiar faces. Ian was playing two sets of Toni Tubna songs mixed with his latest album songs; originally he'd asked me to sing backing vocals from the audience but I think it would only have been me (the Roberts did the stage BVs), and it was almost a relief just to be able to sit and listen. Ian is a really good song writer; all of the set was enjoyable but there were a couple of songs that took my breath away. Oddly, they had simple structures, but the melody of each of them was so divine that there was no necessity for over-decoration or any sort of complexity. After the first, Kieron leaned towards me and whispered 'Now that is a lovely song!'. I also particularly connected with the song about the American train ride. I've chatted about it before with Ian, because although his American train went in a different direction to the one that I took, we both had the same feelings of awe and excitement about what we saw of that enthralling continent outside the train window. Ian's going to send me a CD so I'll be able to share at least one of them in due course. 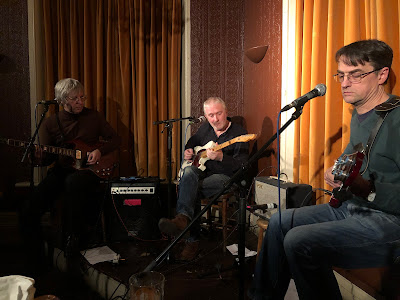 Rarely have I engaged in so much socialising in one day. I woke at six this morning but managed to persuade my body that six is too early for chilly autumn mornings. Hence I'm running late today: the morning I'd planned as an illustration session didn't materialise. Instead, I read The Guardian cover to cover. However, Come Dine With Me has rather nasty participants in this episode, and I feel an afternoon's drawing is in order.