A Weekend Of Gigs

I suppose it probably started on Thursday evening at the Rocksteady in Dalston, where I went to play a short set just to get used to being back out again playing gigs. It was noisy- it's a wine bar, and one poor chap had his own friends talking through his set. However, there was a table of lads near the stage area who were really listening to everybody, and they cancelled the loudmouths out. They were funny, at one point suggesting that I renamed one of my songs 'F*ck Barcelona' and asking if Unsung Heroine was about drugs. Ha ha!

On Saturday we drove down to Rochester in Kent, a fine town with a gorgeous ruined castle and a lovely cathedral. I had never been there before, and found it really impressive. Kevin Younger, man-about-town, had organised a gig for his band The High Span, Oldfield Youth Club and me in a comedy club called The Billabong. It was a great little place, buzzing with the vibe of a recording studio out the back where Billy Childish makes his records (reputedly). The High Span played a really entertaining set of songs, packed with my favourite chords and covering subjects like collecting football cards and the unpopular doll on Playschool, Hamble. 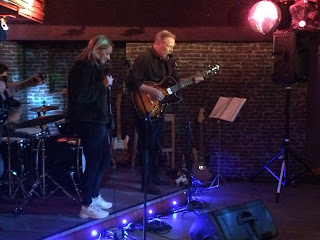 I didn't like her either but I'm not sure why: the song struck a melancholy chord. They were a hard act to follow, but I'd worn a loud shirt to keep the volume consistent and it was simply great to be playing again. I managed one new song amongst the oldsters, and was delighted that both of the bar staff told me they really liked my singing. That's just the greatest compliment in the world, because the people behind the bar are the ones who are there night after night listening to it all. I grew approximately ten centimetres in height after that. 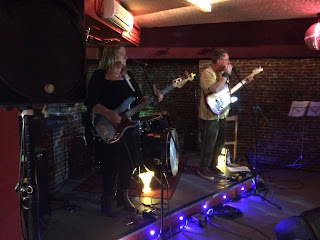 After that, Oldfield Youth Club played a brilliant show- they are so energetic, full of wit and with a song that I am particularly jealous of. Whenever I see them, I try to disentangle the way it was written; I'll get there one day and write one just like it, only completely different. Verdict? Huge fun all round, and there were Chefs fans there too. And Beth Arzy, who pilfered a roll of bog paper from the Gents, and tactfully slipped it under the cubicle door for me. Now that's a pal!

Next thing was Sunday, the High Tide Festival in Twickenham. Again, there was a definite buzz in the air, and it was brilliant to play in Twickenham again- I remember doing a support gig there about seven years ago and really liking the audience. It seemed like a lot of those people were there at the Eel Pie pub, organising the gig and also playing. There was music coming from all six corners of Twickenham (it's that sort of town), and our bit started off with a young band called Piglet, who had heavenly voices and whose music I would describe as dreamwave: ethereal, airy, lovely. 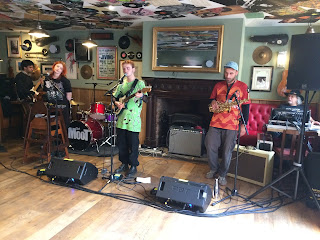 I was on after that, aided by a man who had planned to go to Waitrose to buy cat food, but who had been roped in to do the sound after the original engineer didn't show up. He was absolutely great, and got a really good sound for me as well as doing an introduction. Despite forgetting the words of Saturday Night with the London Set (I managed to do it later on), it was another really enjoyable gig, made all the better for Caryne and Dave travelling all the way up from Frome for the afternoon, a Helen and the Horns fan showing up, the second person in a row of gigs saying they had all the old Peel sessions on a tape somewhere, and Simon Rivers singing along to a lot of my songs (how he do that?). Like Saturday's gig, it was massively friendly, and just like on Saturday the OYC played a stormin' set, made all the better because this is really their home crowd. Simon is a very genial and funny front man and no two gigs are the same: they are powerful musicians as well as having very singable songs.Thee Moot played after them, a tight and punchy band with a definite Mod sound (although they were advertised as psychedelic in the festival brochure) and they too had really catchy songs and could bloody play their instruments: some great crunchy guitar playing there. It was a joyous festival that happened half outside, half inside, and was also very well organised. I can't think of a better way to spend a Sunday afternoon. 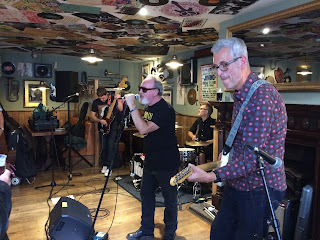 Back to work today- and a very lively song writing session with the new second year students: twelve of them, all collaborating to create one song in just over an hour. I can't think of a better way to spend a Monday afternoon! 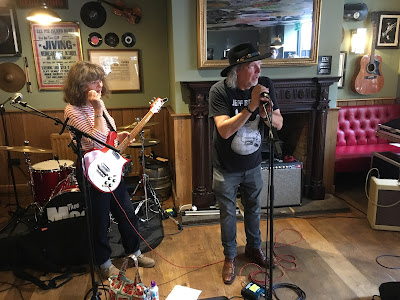 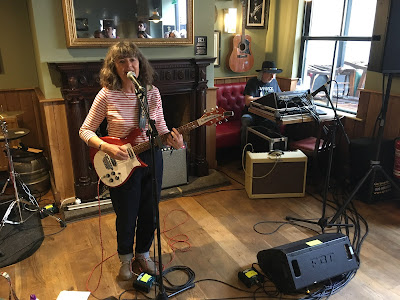