So Dubulah has passed away, and a whole load of memories of working with him, laughing, arguing, eating, planning, drinking, all flooded back last night. I scrabbled through cassettes to find music we'd worked on together, and marvelled at just how many musicians he has worked with in his life, from so many different cultures. I remember him telling off the Ethiopian players on stage at the Edinburgh Festival and how it didn't seem to matter- everyone just took it in their stride. And I remember the first time I marvelled at hearing Transglobal Underground with the Bulgarian Choir samples, and Temple of Sound at Womad, and Dub Colossus at Netil House or somewhere else east... Passing Clouds perhaps? With Winston Blissett on bass, and a horn section, and Mykaell Riley singing. And then Transglobal at Under the Bridge, a glorious reunion where you could still see the schoolkid in everyone on stage. I remembered the Simonics, a five-piece band that consisted solely of Simons and Nicks, who recorded at Elephant Studios in Wapping with engineers named Simon and Nick. I remembered Bumble and the Beez, with Simon Walker on violin and Mykaell Riley singing his heart out. And the Red River Mountain Boys!

Nick would come running with his guitar if you had something musical to do, and a sandwich and cup of tea (or beer) to offer in exchange. You learned to record and keep the first take, because he was so brilliant he'd go off into the stratosphere with his playing after that. He listened to the music in the song and played to it- that's very rare in a musician.

So many of us bought and sold Nick's guitars too. My original Gretsch Chet Atkins Tennessean was his. He had borrowed some money from me, and was trying to sell it to pay me back. I was furious. "Never sell a guitar to pay back a debt!", I told him. But he carried on- so I had the guitar off him, and I've still got it. That was the guitar I played in Helen and the Horns, and it came everywhere with me. Once, he showed me a fabulous guitar he had with gold machine heads. He had just discovered that they had tiny fold-out string winders hidden in them, and the two of us sat and gurgled with delight like two silly guitar nerd babies.

Oh, and we recorded Leaving' You Baby together, too. Somehow, he'd persuaded Robin Scott (of 'M' fame) to let us record for free in his studio in Wivelsfield in Sussex. We went down there by train, and when we got there I realised we both thought each other knew how to program a drum machine. "I'm not touching that thing", said Nick, and that was my first experience of drum programming, the weirdness of which we kept on the proper version of the song. We recorded that at Alaska studios in Waterloo with Paul Gadd, Gary Glitter's son, who was the nicest person in the world and who had  husky dog that sat with us all day. There, Nick told me off for saying I couldn't sing in the mornings (so of course, now I never say that, and can do it perfectly well) because we only had a day. We discovered the delights of the Bell sampler, pushed the faders to the max when the engineer was out making a cup of tea, and had an absolute blast. We phoned Mykaell and he happened to be passing by later that day- he came in, threw a swathe of the most brilliant harmonica playing across the track, smiled and went off again. Same with Simon Walker, who set up, played the maddest thing you could possibly get out of a violin, and serenely floated out into the cool south London air. It was an amazing day. Nick persuaded a friend to release it on his label, Pure Trash, and it even got played on the BBC's folk radio programme on a Sunday morning- and at a nightclub in Spain where King Kurt were playing, apparently. The photo session for the cover was slightly disastrous. Nick dressed up as a Greek god with a toga and ivy in his hair and we sat in a huge truck so my friend Kim could take photos- but the sun hit the screen and most of what we got was reflections. I ended up doing a drawing.

I suppose all this is saying that Nick was a whirlwind of anarchy and can-do that completely blew a hole through bullshit and artifice. You could have quite forthright conversations and then everything would be forgiven. He called me 'Cooks' as a nickname and accepted my tomboyness. When he moved to Spain, I missed him being around but I knew he'd found love, and that was amazing.

I hope his many friends manage to gather and celebrate him soon. He crossed paths with so many of us, and I have to say there are a million things I learned from him. He was the first person who played Brecht and Weill to me. He couldn't help being an educator as well as a friend.

I had to go on a long walk today to calm the shock of hearing that he has gone so suddenly. On the way back, this beautiful little bird was pottering around gracefully at the brook. It was very shy, but I did manage to take this photograph. I know we all have different memories of Nick, and these are some of mine, shared with cyberspace, and it's been quite a therapeutic exercise to write them down as it turns out 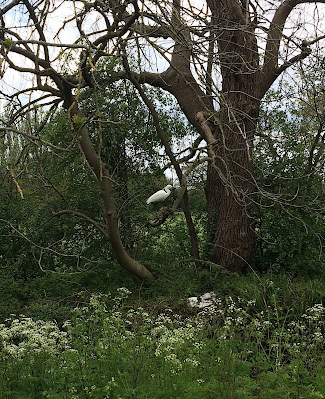 Posted by Helen McCookerybook at Wednesday, May 12, 2021

Sad news. He got regular mentions in your blog over the years, all having the same undercurrent of respect, admiration and love. And enthusiasm, and a zest for life. Always positives, and we all need people like that in our lives. Let's all raise a glass.

Might I suggest you send an edited version of this to the Guardian for their 'other lives' obituaries? Thats how I found out that Bob Golinski had died, which had me singing 'I want to go where they've never seen snow' for a few days. The line even got mentioned - well, it is one of the best ever written.