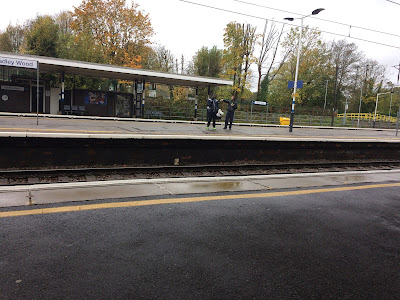 Two very excited and hectic young men bustled ahead of me at the station, crashing through metal gates on to the non-functioning platform (I'd always assumed that those gates were locked).

At first I though they must be railway employees, but their behaviour was quite volatile. They were so excited!

A train shot towards us on the middle line. The tallest of the two clenched his fist and moved his elbow rhythmically downwards making a frantic pulling motion, up and down. The train driver duly hooted his horn, and the two young men shouted in delight.

Soon, the tallest of the two was on the phone, where a third person was being treated to a live feed of the excitement. Every train that passed through was greeted by the same gesticulation: frantic, frantic, pulling down of the clenched fist, and then cheers and leaps when the drivers responded by tooting. Closer to the edge of the platform they moved, and their disappointment when they weren't acknowledged flooded across the tracks to us who were waiting for our through train.

We were with them: the anticipation of the hoot, the thrill, the disappointment.

'Are you all right?' shouted a fellow traveller across the rails to them. 'We are train spying!' shouted the tall chap back.

'We got three!!!' he yelled into his crackling phone, 'Better than Alexandra Palace and there's no-one here to tell us off!!'.