In the 1970s there was a comic for girls called Bunty which had a cut-out paper doll on the back every week with clothes that you could fold on to her. Bunty and it's sister comic Judy were both terrific. There wasn't a whiff of boyfriend trouble, make-up or anything like that- the stories were adventure stories for little girls to read, and on one of the front-cover Bunty stories she was a footballer.
I think it was Judy who had The Four Marys, a centrefold story with four girls all called 'Mary' (naturally) and two female baddies who looked remarkably punky. I have always wondered if they inspired Siouxsie's look in some way, because she might just as well have read those stories as anyone else of our generation.
Anyway- this is from the back page of Shingles, the comic that I edited in the late 1970s in Brighton. I got contributions from lots of different people and it sold in the record shop in Brighton, Attrix, although most people just read it in the shop and didn't buy it.
I believe I could call that a 'W. H. Smith hit'. 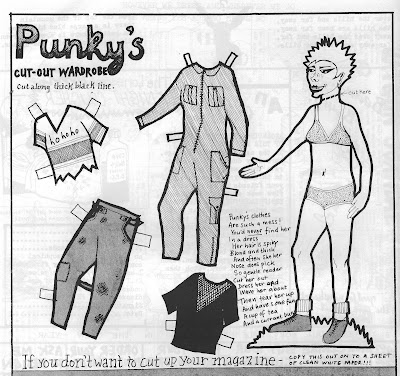