Pheasant Pluckers and Phighting Back 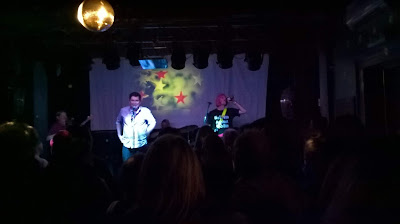 Greedily, and somewhat like the Queen, I stretched my birthday celebrations over several days this year, culminating in a visit to Brighton to take in a a night that simply couldn't be missed: Asbo Derek and The Band of Holy Joy at the Prince Albert.
Rather like Michael Clunkie in Newcastle, the mysteriously named Jane Barnes has a knack of putting together a good bill, and with Steve at the mixing desk (every band's extra member), things kicked off well from the start.
Asbo Derek's lead singer Jem genially filled the gaps between songs with merry innuendo, and the group ran through their hits, eliciting a yelp of delight from my mouth when they announced Buddhist Lost Property, and also later on by playing another one of my faves, Watch What You Drink, a song which is superb in its silliness. Yes, I love the grubby humour and rude repartee too, but nobody does f*ck-it-all pointlessness like Asbo Derek, and the sheer thrill of hearing a carefully arranged, rehearsed and delivered song that consists of lists of idiotic things received in an email, or dreamed up with a pint around a pub table, is utter bliss for a person with a cracker-joke mentality like me. 'Ha ha ha!!',I guffawed loudly and with total abandonment. And of course, that's why I love them so much! And all delivered over a rifftastic backing: Darcy was on fire. The band are able to hit you with solid political comment too, and I loved the new song Nails that tightened the thread between slave labour in Vietnamese nail bars and the recent tragedy of  container-load of people dying of suffocation. What the bloody hell is going on in the 21st century?
This led us perfectly into The Band of Holy Joy's angry and fierce set. No holds barred, Johny tore into Ian Duncan Smith and roared through the set. The band sounded on top form, with James riffing gloriously, a new bass player who put in a fine show, Daryl drumming with aplomb, Pete playing great keyboards that added a psychedelic flavour to it all, and a new powerful set of images from Inge, whose colours even looked angry as they melted into and out of the screen. In front of it all strode Johny, almost in the audience at times, making damn sure we got the idea behind it all. These are powerful songs: So Sad was a standout song of the night, but my favourite one is The Devil Has a Hold of the Land which is an absolute anthem for this horrible political maelstrom that we find ourselves in. This was a completely inspirational set, and they were joined by Vic Godard for the well-deserved encore (yes, all the stars were out two nights ago!). I am looking forward to working with Johny in 2020, which I reckon is going to be the year the artists and musicians fight back.
Yes, it is.
(p.s. Brian, I hope your thumb gets better soon)
Photos by me and a mysterious stranger. 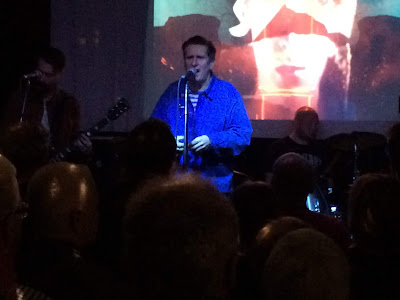