At The Edge Of The Sea, Saturday

It got quite late in the day before I realised just how many women there were in the bands that David Gedge invited to play at this year's festival. As well as Amelia Coburn, who plays ukulele, there were all the women in Cinerama (two guitarists, a bass player and a keyboard player), Terry De Castro (guitar), Salad's keyboard playing vocalist Marijne van der Vlugt, Amelia Fletcher on Melodica and a woman keyboard player in The Catenary Wires, Mary the drummer in Oliver Elf Army, and Jetstream Pony, led by Beth Arzy and featuring a woman bass player, Kerry Boettcher, and a shit-hot female drummer, Sara Boyle. Half of Young Romance, I've just been reminded, are also female. Oh yes, and Helen and the Horns with a female guitarist.
Cinerama, David Gedge's other band, played a really energetic set in the afternoon and I enjoyed them even more than last year. At the end of the set, the band carried on and David came through to the audience to watch them, which was quite surreal. 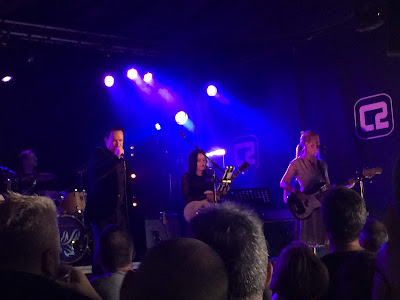 Jetstream Pony were a revelation: such energy and loudness, and such good songs! 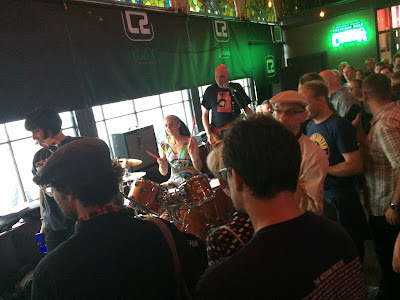 And of course we loved our bit.
Thanks so much for inviting us, David. We don't play very often but this was a great opportunity for us. From the stage, puzzled looks in the audience turned into big smiles and by the time we played our Wedding Present cover, Yeah Yeah Yeah, people were singing along. Just as last year, the audience was amazingly friendly. I love the way they move from one room to the other and support whoever it is who's playing: so open minded.
It was great to see the Augsburg Contingent, the London Contingent, the Bristol Contingent (all one of him) and The Spinningchilli Contingent from Brighton. Dave (trombone) and Paul (sax) were looking forward to seeing Everett True who they went to University with, but they didn't see him, even though he was standing right in front of them when they were playing.
That's what happens when you wear sunglasses on stage.
I had to leave early because I could not be in such a crowd because of health problems after fracturing my elbow earlier this year (very blah, blah, tedious).
I do know, however, from the reports of my spies that the evening went on to higher levels of fabulousness. Once again this was a really heartwarming day: there is no other way to describe it, really. 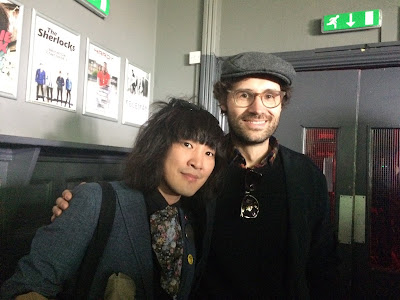 Kenji and Till; Rocker, Kim and Simon Rivers. H and H photo by Beth Arzy. 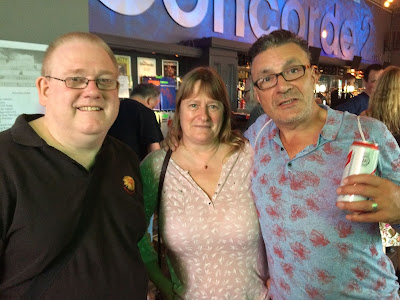 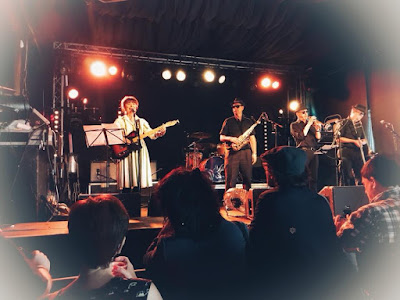