From An Old i-D Magazine

I was wandering around Ladbroke Grove when I got stopped by the photographer who took this.
You could have knocked me down with a feather.
Some of the people I hung out with spent a fortune on their gladrags, and one of them told me that I didn't have the personality to be the front person of a band. Such were the New Romantic times, and manners.
I was also told at a party, 'I've got a pair of shoes like that!'. When I turned to look at the person who said this, he continued '... and I don't suit mine, either.'
Yes, such were New Romantic times, and manners.
Still, those shoes, which I'm wearing here, cost me £1.50. I think they must have been ends of a line; they were suede and did up with little toggles. The jacket came from my friend Alison who I used to work in shop with. It was blue suede with exceptionally curly sheepskin as a lining, and was falling apart rapidly. The trousers were 99 pence in a shop in Kilburn High Road and were too big, which is why I'm wearing a belt. The shirt was Army Surplus, and I could say it was a children's one because it was too small: but there were no children in the Army. It was just small.
The most expensive thing in the whole get-up is the leather belt, which I bought in a shop in the wonderful Kensington Market which had a shop that sold cowboy clothes. It was the only thing I could afford there.
So there's a fashion roundup for you, circa 1984 perhaps, I don't know.
John Peel was on the opposite page. 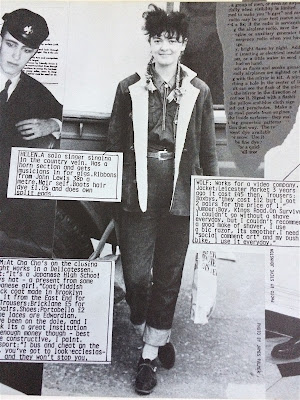 Helen I missed the Radio 4 prog how can i revisit it?