I attended an enlightening symposium yesterday at the University of Newcastle on subjects around the idea of performing prejudice. It was an emotional trip in some ways as McDad used to teach at the University of Newcastle and I walked past a lot of parts of the University that were familiar for that reason, including the bit with a restaurant that we used to go to for a treat.
O the joys of dried-up breaded haddock, pebbly peas and cold stringy chips, followed by a scoop of melting vanilla ice cream in one of those aluminium ice cream bowls that have not withstood the retro twists of time!
But back to the symposium: I can honestly say that there was not a bad paper among them. We heard about Celtic and Rangers and the Catholic and Protestant songs and chants (John Markey); the difference between the words 'diversity' and 'integration' (Rachel Lewis); Alan Turing and a play about his life, exposing the hypocrisy of the British Government of the time (Catrin Fflur Huws); Fascist music in the UK, focused on the band Skrewdriver (John E Richardson); the use of signing by Deaf people to create music (Ely Rosenblum and Jody Cripps); hidden messages in performance and performers at odds with their physical bodies (Simon McKerrell); the Drake Music Project in Ireland and its creative rather than therapeutic approach to music making with differently-abled people (Koichi Samuels); Northumbrian authenticity in songwriting and music and sometimes, inauthentic authenticity (Martyn Hudson).
All from a bunch of really engaging people; there were others who attended who asked interesting and challenging questions and I'm so glad I made the effort to attend and to present a paper. It gave me so much food for thought that is spite of being knackered on the journey home, my mind buzzed and I couldn't sleep a wink on the train.
Names of presenters later, when I have unpacked my suitcase (I was travelling heavy, having spent the weekend in Edinburgh with McMum who had some teeth out and needed a daughter there in case of problems, but luckily there were none). 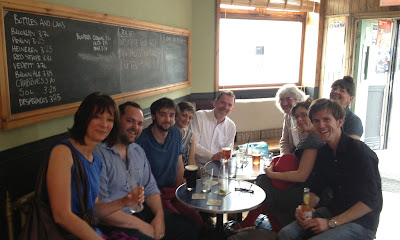