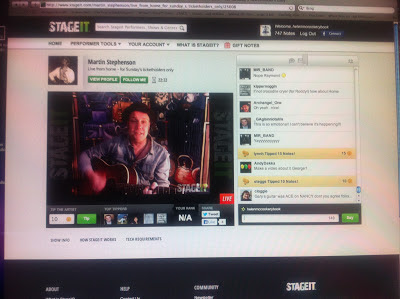 What better way to spend a Monday evening than sitting in the kitchen with a box of ripe strawberries and watching Martin's Stageit show? The anticipation articulated by the subscriber chat in the side-bar was a treat too, as we waited for the countdown from as far afield as Greece, Ireland, Sunderland and Cornwall. And wherever you were...
Sitting in front of a painted set from a theatrical production about the life of Charlie Poole, he began with a short-but-sweet rendition of Soloman to check the volume levels- they were fine, and intimate sounding as they should be for a living-room performance. Requests came flooding in from the feed at the side as we heard Nancy, and Martin swapped to a semi-acoustic for a brilliant rendition of Morning Time to a flurry of Nutella jokes from the silent audience across the net. Morning Time is one of those genius songs that makes me yearn to be able to pick like Martin and despite being written years ago it keeps its air of spontaneity whenever he plays it. Channeling Charlie Poole, he played Sweet Cherwine, a self-cmposed song that pays tribute to one of his songwriting heroes. As the concert progressed, Martin became visibly more relaxed and proved he's got the groove with a version of Orange. The drinkalonga Martin guys requested and received Little Red Bottle and an 8-year old fan heard his request for Boat to Bolivia. As the 30-minute mark was reached, Martin played out with Me and Matthew; Stageit allowed and encore an we heard the newish song Ride (Jim Hornsby's fave), some ragtime playing, Slaughterman (one of my faves), the genius song Rain (why hasn't it been covered a million times?) and Colleen, before being played out with the Reverend Gary Davis. The sidebar banter added to the atmosphere and made Martin laugh from time to time.
As you can see, the little e-gig was packed with music. These broadcasts are going to become a regular thing- hats off to Andy Cairns for rounding up the troops for the second concert.
Ta-ra for now!
Posted by Helen McCookerybook at Monday, June 17, 2013

Found this tonight when YouTube surfing and thought of your recent comments!
http://www.youtube.com/watch?v=9tDNkgqbrGc